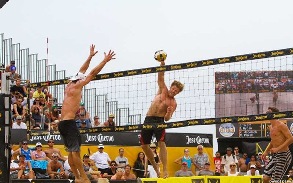 For us So-Cal residents, it’s not uncommon for us to grab our group of friends and head down to the beach to watch a little pick-up game of beach volleyball.  Well, for those who find joy in watching an intense beach volleyball game, here’s your chance to see how the pros do it. Spiking into action next weekend is the 2012 Jose Cuervo Pro Beach Volleyball National Championships at Huntington Beach!

The seven-stop volleyball series, which started in late May and traveled from Florida to New Jersey, Illinois, Hermosa Beach, Wisconsin and Manhattan Beach, is coming to a close on September 21-23 as the summer winds down.  Even though it’s the end of an exciting series, the National Championship not only promises to offer great games, but also a good time for spectators and players alike.

Watch the top pro volleyball athletes compete for the chance to take home a large prize purse of $150,000 in addition to the bragging rights as a national champion.

However, players are not the only ones with a chance to win big; spectators will also have a chance to receive prizes and giveaways.  The Jose Cuervo Pro Beach Volleyball Series offers a Cuervo Village at every tournament, which contributes to its festival-like atmosphere.  It’s only open to the 21-and-over crowd and will feature music, contests and giveaways, including a McDonald’s smoothie giveaway.

And what’s a Jose Cuervo tournament without Jose Cuervo? If you head over to the Cuervo Village you can indulge in delicious Jose Cuervo drinks and cocktails!

In addition to these festivities, the tournament will also feature a Paul Mitchell Haircut saloon station, which will offer haircuts to spectators. So if you had to cancel your hair appointment to go to the tournament, no worries!  This volleyball tournament has you covered.

Whether you want to root on your favorite volleyball players, experience a pro game or just partake in the drinking festivities, it doesn’t matter! The Jose Cuervo Pro Beach Volleyball National Championship will be a fun time for all.

So bring your sunscreen, sunglasses and 21-and-over ID card and witness one of the country’s most exhilarating volleyball tournaments on the beautiful Huntington Beach.