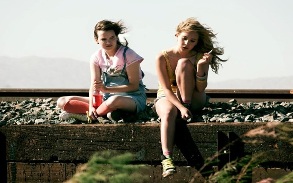 Elgin James won’t change a thing in his directional debut Little Birds, if given the chance.

A film, which tells the story of a teenager desperate for a better life — for James, it’s a semi biographical project that was born out of his own personal struggles.

“I was homeless and in a gang for over a decade, and after my mom got sick, I made a promise to her that I would change my life for good,” shares James, who had a volatile childhood and found solace and refuge in local art houses as a kid.

Also written by James, Little Birds circles around 15-year-old Lily (Juno Temple) and her best friend Alison (Kay Panabaker) who live on the shores of California’s Salton Sea among rundown trailers parks, rotting household items, drained pools and decaying streets. Lily, who lives with her manic, single mother (Leslie Mann), feels claustrophobic and rebellious and yearns for something more exciting than visits with her young and already washed up aunt (Kate Bosworth). When the girls meet a few visiting street kids, Lily, drawn by the freedom of their lifestyle, convinces Alison to follow the boys back to Los Angeles.  But in the big city, they quickly fall into the boys’ world of scams and petty crime and things quickly escalate  into a life-changing moment.

“The idea to make the movie through girls came to me one day when my wife and I drove out to the Salton Sea and I saw two girls riding away,” James continues.

“It just came to me that I would write my autobiography through girls, as it’s so much more interesting,” adds James, who ran away from his Boston home at a young age.  “Little Birds represents these girls and the birds there at the Salton Sea on a migratory path. All I wrote were words on paper, and these two came in and made it breathe.”

This is a movie which will resonate with audiences.  With great cinematography, several scenes capture the state of disrepair in the trailers and area tells us all we need to know about the emotional arc of the characters. James gives us reason to hope, once Lilly escapes the confines of her trailer park, but he provides no guarantees. Her story is simply another sad tale in an ongoing cycle, captured well by James and is a brutally honest portrait of lost innocence.

Centered on a teenage kid keen to escape her current conditions, the film provides no comfortable answers for solving any of the problems it so well describes – a troubled teen, from a dysfunctional family with little hope of a decent future.  The story’s world is stacked against Lily, and for Temple, who has earned a great reputation portraying troubled female characters it was a role she was drawn to.

“It’s that time period in a woman’s life that is fascinating to me and I am attracted to films like this as it’s important to show the world different aspects of being a young woman. Lily so strongly believes she is ready for the big bad world and she is not. I got to spend so much time with Elgin and we talked through the character so much. I have never had that opportunity to spend two years creating a character.”

Also starring Kyle Gallner, Chris Coy and Carlos Pena, the drama that unfolds in Little Birds is like a train wreck waiting to happen.  Despite a slow start, extreme things happen, but yet it all feels real and genuine thanks to the devoted and talented cast and James’ meticulous attention to every detail, which helps the movie unfold like actual lives playing out on screen.

“This movie is about leaving home too soon and the world you will find waiting for you,” shares James, “I am 100% satisfied with this film.  This is how I envisioned it, and there is nothing I would change.”