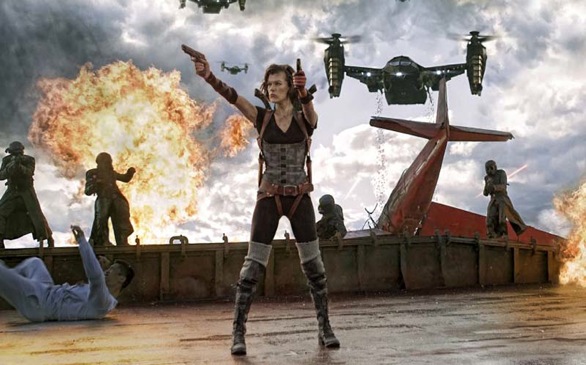 Milla Jovovich is back in Resident Evil: Retribution
(Credit: http://www.residentevil-movie.com)

The first Resident Evil film was released 10 years ago. Based on the video game of the same name, the film did a good job of playing to fans of the games and newcomers. It also did well enough at the box office to warrant four sequels.

Now, the fifth film in the franchise is about to be released. The story follows Alice, played by Milla Jovovich, as she continues her battle against the Umbrella Corporation. We last saw her in Resident Evil: Afterlife, where she and her friends, Chris and Claire, had found a ship full of survivors. Albert Wesker, had been holding them there for experimentation, and each of them had a glowing red scarab on their chest. As explained in the film, the scarab is used as some sort of mind control device.

In Resident Evil: Retribution, we pick up exactly where the last film left off - sort of.  The film opens with Alice lying unconscious in the water. In reverse motion, we are shown the entire battle on the Arcadia (the ship holding all of the survivors) as the opening credit sequence.  It’s pure cinematic eye candy, and it’s done incredibly well.

The next scene we see is that of a suburban Alice waking up. It’s a seemingly normal day.  She is helping her husband and daughter get ready for work and school. Suddenly all hell breaks loose, and we see a very vulnerable Alice try to save her daughter, Becky. Most people who watch the Resident Evil films know that they haven’t been frightening at all since the first installment.  However, the suburban Alice sequence is rather terrifying.

The action sequences in Resident Evil: Retribution are outsanding; they’re jaw-dropping. None of the other films have even come remotely close to pulling off the stunts that they do in this film. One particularly impressive scene involves Alice fighting off hordes of undead Tokyo citizens in a corridor of light. The fight choreography in this scene is absolutely flawless.

Overall, the film is miles better than it’s predecessor. It is much more fast-paced, and the action is non-stop.  However, one thing that the film lacks is explanations. It glazes over many issues that should have been explained further. However, it is nice to have so many old cast members back (Michelle Rodriguez is a definite stand out in the film).

The best thing about this film is that Alice is human-like again. When you watch Resident Evil: Retribution, you actually worry for her well-being as she is put through hell.  Alice is also given the responsibility of taking care of a small child, which was a really interesting aspect of the character that we hadn’t really seen before. The maternal instinct and vulnerability of her character really shed new light on Alice’s personality. In the past few films she’s been almost robotic, but in Retribution, she lets her emotions show. It’s refreshing.

Resident Evil: Retribution is not perfect.  The story could really use some work, and it seems that director Paul W.S. Anderson has a longer director’s cut in the works. If you are a fan of the Resident Evil movie series, you will love this film. It’s a fun, action-filled roller coaster, and that’s exactly what it’s supposed to be.