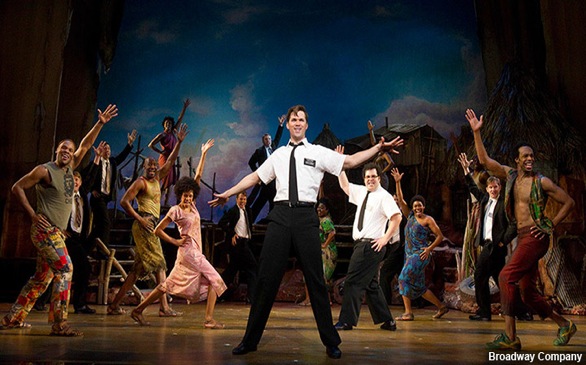 It’s a relentless spectacle of enthusiasm. It’s ambitious, over-the-top, and just the right amount of offensive. Perhaps the most anticipated Broadway opening this year, “The Book of Mormon” made its Los Angeles debut last night at the Pantages Theater, with a head turning rendition of the Tony Award winning musical.

A comedic peek into the quirkiness of a faith that very few truly understand, “The Book of Mormon” is the story of two young men who have just embarked on their coming of age ‘mission.’ Sent to convert non-believers in a poor, remote village in Uganda, Elder Cunningham and Elder Price struggle with the challenges of being devout and innocent missionaries in a town that is anything but.

“The Book of Mormon” is written by Matt Stone and Trey Parker, the creators of the animated television series, “South Park.” After having used the series to display a propensity for composing musical numbers, Parker and Stone teamed up with Robert Lopez (co-creator of “Avenue Q”) and choreographer Casey Nicholaw to create a show that is big enough for Broadway.

Much in the same vein as “South Park,” “The Book of Mormon” is crass, satirical and for the most part, laugh-out-loud funny. There are definitely instances where the writing goes a bit overboard; certain musical numbers become hard to follow because they are packed too heavy with punch lines. And furthermore, certain comedic themes within the story line tend to cross the line of what one would consider to be tasteful. In this instance, it’s hard to be amused by a performance whose villain is a Ugandan warlord who specializes in female genital mutilation.

Yet, despite the humor, satire and offensiveness afforded by the script, what truly stands out in this show, more than anything, is the performance. This is an extraordinarily demanding musical, both vocally and physically. Every single number is an intense display of energy and stamina from a cast that can sing to the rafters. The choreography explodes from the stage and the volume is tremendous; all jokes aside, “The Book of Mormon,” can stand toe-to-toe with even the most notable tours currently on Broadway.

The standout performers in the Los Angeles run of “The Book of Mormon” are the show’s three leads. Gavin Creel takes on the role of Elder Price, teaming up with Jared Gertner who plays Elder Cunningham. In a display of energy, range and maturity, Creel is able to portray a character who is highly complex, but also funny and relatable. Cunningham, on the other hand, steals the show with his comedic relief and onstage antics. Samantha Marie Ware as the female lead, Nabulungi, complements the duo with a massive, yet delicate voice that adds an element of beauty into numbers that would otherwise come off as an overdose of exuberance.

Overall this show is incredible. It is as hilarious as it is impressive, and offers a satirical point of view that is hard to argue with. Just as crass as one would expect from the co-creators of “South Park”, “The Book of Mormon” is so much more than a few funny jokes told on stage. It is an outrageous performance, a well-written musical, and the Pantages’ hottest ticket this year.

Musical
Summer: The Donna Summer Musical Comes to the Hollywood Pantages from Nov. 5 thru 24!
2,409 views