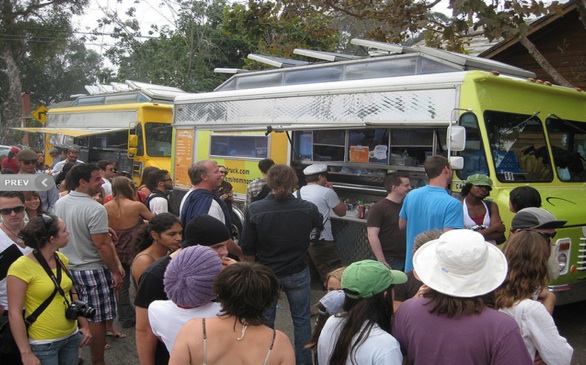 From amongst the plethora of these mobile restaurants, these are the trucks every Angelino must experience.

Kogi BBQ
Kogi Korean BBQ practically spearheaded the gourmet food truck movement in Los Angeles back in 2008 when it got its start. Kogi’s cuisine is Korean-Mexican fusion, but unlike the hordes of other fusion food trucks roaming around L.A., Kogi’s novelty doesn’t wear off. Kogi embodies the right amount of avant-garde, while still being able to appeal to the taste buds of masses. Fan favorites include the Sweet Chili Chicken Quesadilla, Blue Moon Mulita and Calamari Taco. kogibbq.com

India Jones Chow Truck
I’m constantly craving a curry fix, but it’s difficult to find an easy grab-and-go Indian spot in L.A., let alone any other place outside Bharat. So when I first saw the India Jones Chow Truck pulled up on the USC campus as I was making away to class with a grumbling belly, I felt as though my prayers had been answered. My favorite is the $11 combo special, which grants you one Frankie and one small curry – it’s the perfect amount of filling without being overkill. indiajones.blogspot.com

LudoTruck
Chef Ludo brings a modern gastronomic twist to an age-old classic: fried chicken. I first heard of LudoTruck when it was featured on the season one finale of Anthony Bourdain’s “The Layover.” In the episode, Bourdain is shown chomping down on one of LudoTruck’s specialties: Ludo’s balls. Bourdain’s assessment? “Obscenely good.” That’s not the first time LudoTruck has been praised by a famous celebrity in the foodiesphere: Pulitzer Prize-winning food critic and writer for the L.A. Times Jonathan Gold dubbed LudoTruck as being one of “99 things to eat in L.A. before you die.” ludotruck.com

Buttermilk Truck
As the popular saying goes, breakfast is the most important meal of the day, and I’ve got you covered in that area. The Buttermilk Truck brings a gourmet twist to everyone’s favorite breakfast classics. Fan favorites include the Red Velvet Chocolate Chip Pancakes served with butter and syrup, and the Fried Chicken with Housemade Cinnamon Waffles served with butter and syrup. And the best part is that Buttermilk runs day and night. Breakfast for dinner? Sign me up! buttermilktruck.com

The Gastrobus
Housed in an inconspicuous-looking yellow truck that looks like something straight out of “The Magic School Bus,” you wouldn’t know by looking at it but The Gastrobus serves up some of the best sandwiches L.A.’s food truck community has to offer. Gastrobus’ menu is limited to a handful of menu items, but judging by how consistently delectable each concoction is, its menu seems to the product of careful and conscious curation. And at an affordable $6 for a sandwich, Gastrobus is among the lesser expensive of food trucks. thegastrobus.com

Grill ‘em All
You might remember Grill ‘em All from season one of Food Network’s “The Great Food Truck Race,” beating out runner-up Nom Nom Truck for the first place spot. Grill ‘em All continues to churn out some of L.A.’s finest burgers with some serious rock ‘n’ roll flair. Popular dishes include the Behemoth Burger – grilled cheese buns, cheddar, bacon, beer soaked onions, pickles and Grandma’s Mosh Pit BBQ Sauce – and the Hannah Montana – served with American cheese, lettuce, tomato, pickles and ketchup. These burgers mean serious business. If you’re watching your figure, then you probably have no business being here. In short, these burgers are as hardcore as its metal-loving founders, bandmates Ryan Harkins and Matthew Chernus. grillemalltruck.com

Nom Nom Truck
“Nom nom” describes that involuntary sound your mouth emits when you bite into a treat so delicious it immerses you into an unparalleled state of food-induced ecstasy. Nom Nom Truck succeeds in doing just that with its tasty Vietnamese creations. Their specialty is Bánh mì, a type of Franco-Vietnamese sandwich served on a baguette and typically containing pâté, cilantro, hot peppers, pickled carrot and your choice of cold cut. And at only $6.50 for a hearty Bánh mì sandwich, Nom Nom ranks among the more affordable food-on-wheels meals in L.A. If Bánh mì isn’t your thing, Nom Nom also offers up some equally delectable Vietnamese-inspired taco and salad options – noms. nomnomtruck.com

The Grilled Cheese Truck
How can something so simple be so good? Maybe it’s because it plays to our childhood nostalgia, making us think back to the days when mom would make you a grilled cheese sandwich using Kraft Singles (crusts cut, of course). While that’s still a fine treat, today’s grilled cheeses are a lot more adventurous. In addition to the basics, The Grilled Cheese Truck also offers a Cheesy Mac and Rib sandwich, Brie Melt on potato peppercorn bread, Havarti Melt on French bread, and a Caprese Melt on roasted whole garlic bread. Sorry mom, but these grilled cheeses are just better. thegrilledcheesetruck.com

Yalla
Here’s one for the vegetarians or those simply looking for a healthy food truck alternative. Yalla’s completely vegetarian menu offers an international spin on classic Arabic fare. Falafels are the specialty here and can be served up sandwich-style on pita bread with many different sauce and ingredient combinations tailored to suit any taste bud. Come one, come all, as its menu boasts dishes with Thai, Greek, Italian and Southwest influences... and if none of those appeal to you, you can even build your own falafel sandwich. Also, if you’re like me and hate getting gypped on falafels in a bowl or in a sandwich, fear not: Yalla is extremely generous with its portions. facebook.com/YallaTruck

Get Shaved
Looking for a sweet confection served up on a set of wheels? Get Shaved serves up tasty Hawaiian-style shaved ice that’ll send your mouth into a roaring whirlwind of sugar-enriched euphoria. What separates a Get Shaved snow cone from your typical run-of-the-mill Popsicle-brand snow cone is its addition of sweetened condensed milk and creamy ice cream... not to mention delicious 30 plus flavors, which include some more unusual choices such as Tigers Blood (watermelon and strawberry infused with a hint of coconut), Hawaiian Punch, Lilikoi (better known passion fruit) and Li Hing Mui (salty dried plum). getshavedice.com