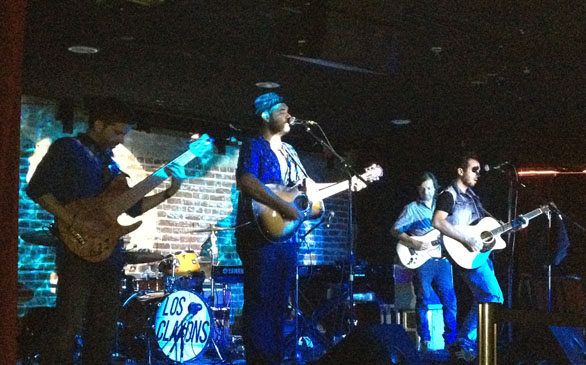 Mexican pop and alternative rock band Los Claxons continue to evolve musically, and their fan base is receiving some of the best music they have ever produced. Since 2004 and after four albums, this quintet has been more than solid.

Such was the case Thursday night at Los Globos, where Los Claxons performed for the Los Angeles-based audience. Indeed, it was an entertaining night. Composed of Mauricio Sanchez (voice and guitar), Ignacio Llantada (voice, guitar and rhodes piano), Edgar Lozano (electric guitar), Pablo Gonzalez Sarre (bass, guitar), and Cesareo R. Castillo (drums), the group appeared to be quite thrilled to playing in L.A.

In their second release, En Primera, Los Claxons included a track titled "Los Ángeles." It holds a special meaning. The tune, in brief, details the band's grand desire of performing in L.A., which is now a dream come true.

Tunes from Sin Ganga, En Primera, Los Claxons and their most recent work, Camino A Encontrarte, became sensational live displays by the group. The packed crowd danced, sang and smiled throughout the event while showing obvious satisfaction.

Los Claxons, who attained their artistic name off a large truck with the word "claxons" on the side, were the opening act for Maroon 5's brief Mexico tour in 2008. Natives of Monterrey, this group is musically legitimate - they rock romantic songs and do so differently. The vocals are impressive, but the lyrics and live playing is off the charts.