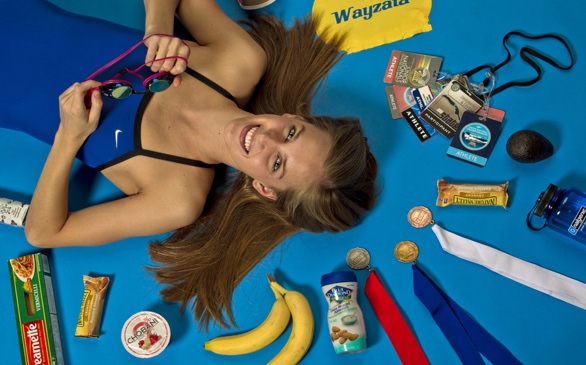 The raw bell peppers' crispness muffled the noise coming from James Onwualu's mouth as he described the purpose of the colorful snack.

Red, yellow and green peppers, mixed with broccoli and spinach, are a vital part of living a purified life, the Cretin-Derham Hall High School senior said. It's the nourishment he sees as required to adequately prepare for goals that reach far beyond being the best wide receiver in Minnesota.

Emphasis on nutrition, carefully sculpted to match growing teenage athletes with their sport's demands, are the edge that Onwualu and other talented individuals use to become the best in their sport.

In a generation more accustomed to going online to educate themselves, these athletes form their detailed eating habits by heeding coaches, personal trainers and even parents.

Across the metro, blue-chip athletes are similarly disciplined and committed.

Each of these sacrifices has molded this group into the best and, in some cases, convinced fellow teammates to simply pay more attention to meals.

"(Performance) depends on what you eat. I don't eat candy. I don't drink pop. I keep my muscles hydrated and healthy," Onwualu said. "I feel my body is more pure. Food has kind of become not a pleasure. I don't love different kinds of food, but there are certain things I eat that are good for you."

Hopkins volleyball coach Vicki Seliger-Swenson empowers her team by handing out articles on nutrition. She said the awareness has created an overall healthy environment regardless of the athlete's commitment level.

An average week for Onwualu begins with a visit to the supermarket with a detailed grocery list, edited by nutrition and training coach Ted Johnson. Onwualu prepares his own meals. Along with peppers, his recent lunch included a couple of forms of fruit and three sandwiches - turkey, chicken breast, ham.

This midday refuel is part of a 5,000-6,000-calorie diet engineered for Onwualu's needs not only as a football player, but more specifically a wide receiver.

"Pretty sophisticated stuff" is how Johnson categorized the lifestyle. Along with the rigorous no-supplement nutrition habits he instills in clients, he also pushes them beyond traditionally accepted workouts.

Underhill, training alongside Johnson after missing all of last season because of a knee injury, gained 20 pounds while maintaining 8 percent body fat. In-depth analysis of the Wayzata running back's body type and its needs produced a diet of six to seven meals a day. At each meal he consumes a serving of vegetables and avoids sugars. The senior's attempts to gain weight allow for one sweet exception: His final meal of the day is often ice cream and waffles.

"I pretty much just eat the same thing. We don't have anything else (at home)," Underhill said. "It's more about performance and gaining weight. And outlasting everyone."

On Underhill's first carry of this season, he ran 62 yards for a touchdown. He took no Gatorade to recharge. Johnson's methods discourage the popular sports drink. Water is enough.

What he does encourage, though, is a daily diary of what the body consumed. Each night his athletes send him pictures of their meals.

"I see it as necessary, because I want to be the best there is out there," Underhill said. "I want to be the top athlete in Minnesota. Not everyone has that goal in life, but that is how I see it."

Found among the Waconia volleyball team rules is a section on nutrition. It's important to coach Jim Lee that his athletes are well-fed.

"If we eat healthy, we play healthy," Pioske said. "You can tell if you eat a bunch of junk food. You feel slower and don't feel as energized. You're more awake and alert."

That means limits - two cans of soda per week, no coffee, no candy or cookies Monday through Friday - to help Lee's group produce a more balanced diet.

Rasa Troup, a sports nutrition specialist and dietitian for University of Minnesota athletics, believes such guidelines will help create good eating habits. An advocate for healthy lifestyles and nutrition-minded athletes, Troup is concerned about misinformation leading to exaggerated eating that has adverse effects on athletes. Her research has shown that teenagers often use unqualified sources, such as the Internet or teammates, as nutrition guides, instead of a trained professional.

"From my experience is that when I talk to high schoolers, only a few of them understand how to fuel the body for physical performance. Some don't fuel enough and some are overfueling," said Troup, also a former Olympian. "If athletes get information from correct places, they can fuel the body for adequate performance."

Hauger's eating and training have been monitored by her father, Dave, since she was in seventh grade.

She is a three-time Class 2A girls' cross-country state champion. He's a strength and conditioning coach and understands the challenge of preparing an athlete's body to perform and recover.

"When I started I didn't know how much of a game-changer it actually is. Now I realize that," said Maria Hauger, a senior. "Now more people are starting to figure out it's not just about running."

Wayzata's Class 2A 100-meter backstroke state champion Paulson relies heavily on food to fuel her long days in the pool. She figured out early in her career that bad food meant an even worse time in the water.

"Food is fuel," said Paulson, who added she couldn't remember the last time she ate at McDonald's. "It's about sticking to a routine. Stay on the same habit of same foods or going to bed at the same time."

Trudging up and down the soccer field was no longer good enough for Neiberger. The Southwest junior decided to change the way he eats after his body let him down during a summer tournament. His calves felt tired, his legs heavy, and he had little energy late in games, symptoms he now associates with junk food that was part of his eating habits.

"It's not worth eating junk food," he said. "Now I feel so much more in shape. I was really surprised."

Fruits and water are Neiberger's new snack as he enters his third year as a varsity starter and team captain.

"They do what they need to when no one is watching," Johnson said about the nutrition-minded athletes. And they believe food does the same for them long after it has been devoured.