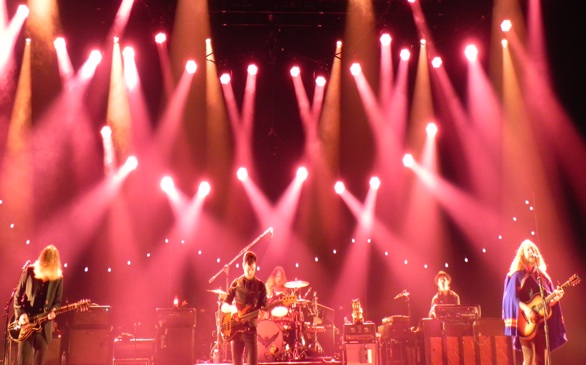 My Morning Jacket gave the fans what they wanted at their three-day run at The Wiltern.
(Credit: Josh Herwitt)

When My Morning Jacket agreed to hit the road this summer for its latest tour, the Louisville five-piece wanted to do something it had never done before.

Still reeling off the success of its 2011 studio effort, Circuital, My Morning Jacket booked more than 35 dates across the U.S. and Europe over the course of three months.

But with no new material in the works yet, front man Jim James and his band mates were in need of a way to maintain the momentum they had built over the past year.

Thanks to the help of management, My Morning Jacket decided to let the fans have a part in its live shows for the first time in 15 years. In what would be coined as the “Spontaneous Curation Series,” the band elected to have concertgoers submit song suggestions each night through its Twitter account and fan club.

The concept looked quite clever on paper. While building more interest in the shows through fan participation, it would also cultivate new social media users for the band.

Still, My Morning Jacket vowed to avoid repetition in its set lists too, and keeping that promise for a three-night run in Los Angeles presented a whole new challenge.

Those who made it to the historic Wiltern Theatre — whether it was for one night or all three — weren’t asking for their money back afterward. For more than six total hours on stage, My Morning Jacket dug deep into its catalog and seemingly hit all the right notes.

With Portugal. The Man kicking things off, the first night was highlighted by some stunning covers, between Elton John’s “Rocket Man,” The Band’s “It Makes No Difference” and Prince’s “I Could Never Take the Place of Your Man.”

The second night, which featured Iron & Wine as the opening act, included a few more of those tricks, along with a host of My Morning Jacket hits. Fans were treated to Erykah Badu’s “Tyrone” and George Harrison’s “Isn’t it a Pity,” but it was The Clash’s “Rock the Casbah” during the band’s encore that really ignited a response from the crowd.

For its third and final night, My Morning Jacket left no stone unturned. Following Seattle-based hip-hop group Shabazz Palaces, My Morning Jacket upped the ante one more time with an encore that couldn’t have been more perfect. Fans heard favorites like “Victory Dance,” “Holdin On to Black Metal” and “One Big Holiday,” but it was once again the band’s covers, this time of Lionel Richie’s “All Night Long” and Curtis Mayfield’s “Move On Up,” that left a room full of fans eagerly awaiting its next return to the City of Angels.