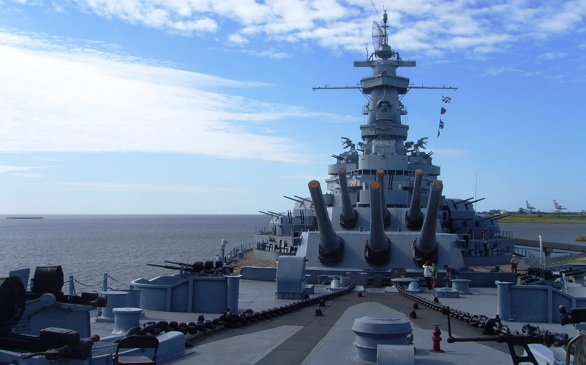 The USS Alabama is now a floating museum in Mobile, Ala.
(Credit: Kevin Wierzbicki)

You can’t miss her; she’s huge and in a way she’s the most beautiful thing to be found in Mobile, Ala. I’m talking about the USS Alabama, the decommissioned battleship that is now a floating museum moored in Mobile Bay. The ship shot down 22 enemy airplanes during World War II, and a tour offers participants a chance to man the ship’s big gun turrets, capable of firing shells accurately up to 21 miles when they were operable.

But the artillery is only one of many interesting points on the self-guided tour; step through hatches and navigate the narrow steps between decks, and you’ll see the radio room, the brig, sleeping quarters, a very impressive kitchen and even the place where the sailors hung out and purchased snacks when they had a bit of time to relax. At least two hours are needed to thoroughly prowl the battleship, and you’ll probably want to allot a good half-day if you want to see the other attractions at Battleship Memorial Park, including the submarine USS Drum and a large display of military aircraft that includes a tribute to Alabama’s own Tuskegee Airmen. There’s also a really fun flight simulator experience that you can have for a few extra bucks.

A visit to Mobile will definitely have you wanting to get in or out on the water and the options for playing in the bay are virtually unlimited. But not all of the watery fun is out on the glistening sea. Take a pontoon boat tour of the Mobile-Tensaw Delta with 5 Rivers Delta Safaris to enjoy a relaxing float through marshes filled with stands of cypress and tupelo gum trees. You’ll most likely see plenty of alligators sunning themselves or splashing into the water, and if you’re really lucky you might spy a wild boar stomping through the swamp. For sure you’ll notice turtles, pelicans, osprey, herons and cormorants and maybe beaver, nutria and bald eagles. Some of the dilapidated fishing camps you’ll float by are also quite splendid in their ruin and make for good photo opportunities.

Back in the city, Mobile has plenty of attractions for first-time visitors to consider. Among them is the Mobile Carnival Museum where you’ll find a lavish display of everything having to do with Mardi Gras, including tons of ornate costumes, gowns and robes.

At the Museum of Mobile, 300 years of the city’s history comes alive through thousands of artifacts including a tribute to musical Mobile and quirky items like Hank Aaron’s record-breaking 754th home run ball (Hammerin’ Hank, now 78, is a Mobile native.)

And of course Mobile is famous for fresh seafood; try local favorite Wintzell’s Oyster House where you can savor trays full of the shellfish prepared “fried, stewed or nude.”

To plan your trip to Mobile, visit mobilebay.com and alabama.travel.