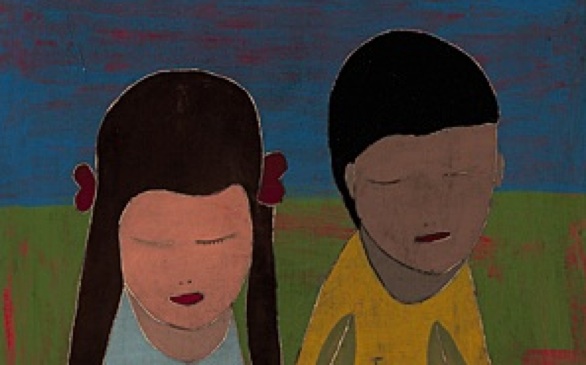 At first glance, Gasparian’s paintings bring to mind a childlike innocence. Then, the deeper sociopolitical criticism emerges. She continues to tell her grandmother’s story through her art and her activism.

Gasparian recently became involved with an organization called The Karma Underground. Gasparian will be part of the very first benefit produced by founder Lydia Emily Archibald on September 21.

A volunteer only organization, The Karma Underground was recently created in April 2012 with the intent to help those in need solely through the use of art.  The organization’s slogan is “Art can do more than just hang; it can help.”

A Tibetan charity, KarmaBlast will be the first recipient to be awarded funds from The Karma Underground as part of the upcoming benefit. KarmaBlast is an online network created by Bodhicitta Inc., a non-profit organization dedicated to helping those who are less fortunate.

Gasparian is proud to participate in the upcoming benefit for KarmaBlast.

She explains, “It is inspiring to be part of a show that raises funds to start an art program at a local women’s shelter and to build a school in Tibet for nomadic girls.”

Gasparian continues, “Ironically, the KarmaBlast charity art show and auction is a rebellious act because anyone who assists the Tibetan people is going against the Chinese government.”

Gasparian has generously donated one of her works for the cause along with many other talented artists such as Van Arno, Birdman, Tada Chae, John Carr, Shepard Fairey, Casey Gray, Andrea Lahue and many more.

The benefit will also feature live painting by Samir Arghandwall of 7th Letter and DJ sets by J. Rock, Tick (Latch Brothers/Routines/Dragons), Kiino Villand and Special Guests. There will also be live screen-printing by Hit and Run. A limited edition print by Malleus will be for sale to benefit the cause. ?Gasparian continues on her journey, expressing her politically charged opinionsthrough her art.

“My work has always been socio-political, dealing with women’s issues and ethnic dislocation,” she says. “Fighting for equal human rights worldwide has always been a part of my concepts and always will be.”