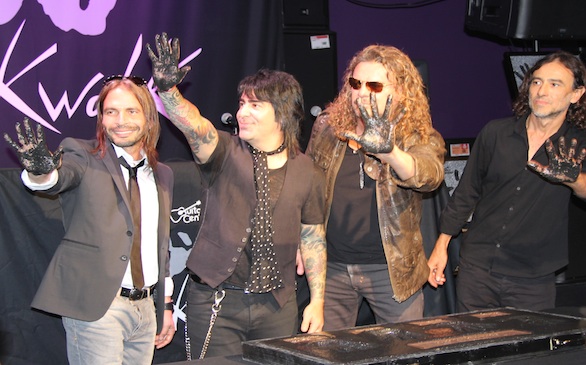 "This is a tremendous honor for us," drummer Alex González says.

The Guadalajara, Jalisco-based group will now have their handprints, signatures and faces along side Carlos Santana, Johnny Cash, Aerosmith, Marvin Gaye and Queen, among several other accomplished musicians.

For as long as we can recall, Guitar Center’s RockWalk has been dedicated to honoring those artists who have made a significant impact and lasting contribution to the growth and evolution of the Rock’n’Roll, Blues and R&B world.

"For us, it is a great honor. It's a dream to be able to share this with such great artists," vocalist/guitarist Fher Olvera says.

Consisting of Olvera, González, guitarist Sergio Vallín and bassist Juan Calleros, Maná found its birth in 1986 when the quartet sat out to just play at Olvera's house. Over the years, Maná - who fuse pop rock, Latin pop, calypso, reggae and ska, among other genres - has sold millions and millions of albums worldwide.

Billboard magazine has heralded Maná as "the most widely sold and heard Latin band in the world." And it truly is.

Now, the band is a historic part of Guitar Center's RockWalk.

"It's such a humbling honor," González adds.