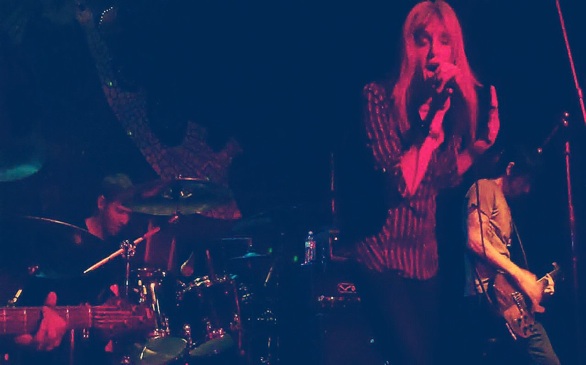 The rock scene has evolved quite a lot over the years, and when it comes to modern metal, the female-fronted group, Lucid Fly, definitely has showcased the perfect blend of nu metal and progressive rock. Its show at Dragonfly on September 16 illustrates this point.

The band provided a sonic experience that can be summed up in two words: ultra-energetic and (hauntingly) addictive. The band head banged and jumped around at appropriate times, adding an extra ounce of energy to the already kinetic songs. Not to mention, the lead singer’s powerful voice hit all the right notes throughout the entire performance, and her long, lean model-like body frame is certainly icing on the cake.

With dark and edgy arrangements, heavily distorted guitar sounds, as well as raw emotions, there was an unresolved and mysterious aura looming over the whole bar as the band performed. The modern rhythmic vibe of its songs was not only soulful, but also had a head-banging mainstream appeal. The balance between mainstream rock and modern metal and alternative rock was done very well.

Overall, the songs were not too commercial and not too peculiar that the band sounded too bizarre to the general audiences’ ears. It is definitely not an exaggeration to say Lucid Fly made me think of Evanescence meets A Perfect Circle -- its songs really do resemble those two styles!

Besides having outstanding skills in managing the technical aspects of music and a haunting female vocal, what sets Lucid Fly apart from other small-club bands is that the band member are great at interacting with the audience and bringing fire and liveliness to the stage. This helps connect Lucid Fly closer to the fans and helps the audience understand its music on an even deeper level. Quite frankly, most small-club bands fail to do this.

By the end of the night, Lucid Fly’s impassioned and impressive performance proved that they have the whole package every band yearns for: It has the right visual, vocals, attitude and energy. The flawless arrangements that the band members bring to the table are a result of the band's superb musicianship.

The only complaint of the night is its performance was too short (seriously!). Lucky for us, Lucid Fly is going to have another live performance on October 11 at The Mayan in downtown L.A. for the Raw Artist "Provocations" showcase. It is a great opportunity for those of you who haven’t met Lucid Fly to finally get a chance to learn more about its music. For you loyal fans: Reunite and rock another night away with them!