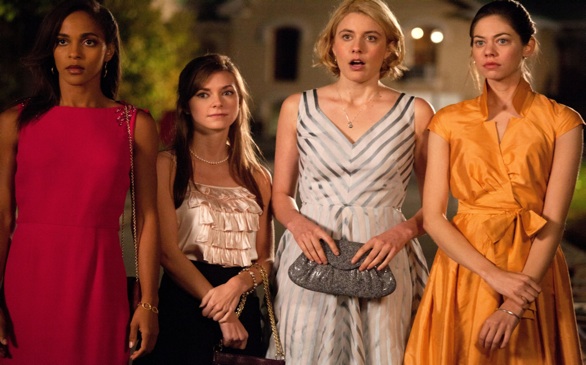 Damsels in Distress is available on DVD September 25.
(Credit: sonypictures.com)

Under the Radar: Indie auteur Whit Stillman (Metropolitan) brings his characteristically clever writing to bear in Damsels in Distress. Greta Gerwig stars as the leader of a group of college girls who try to inject some life into their lame school with a quirky approach.

A hypnotic callback to 1970s midnight movies (replete with ominous synth score), Beyond the Black Rainbow takes place in a futuristic psychiatric facility where a heavily sedated woman with psychic powers attempts to break free.

Funny Business: From the author of Wag the Dog comes Salvation Boulevard, a satirical poke at Evangelical mega churches. Greg Kinnear is a born again Christian who witnesses his charismatic preacher (Pierce Brosnan) shoot a man. Now Kinnear is running for his life.

The Horror! The Horror!: Joss Whedon (The Avengers) and Drew Goddard (Cloverfield) get meta with The Cabin in the Woods. What starts as a typical horror flick set-up—a group of teens spending the night in a secluded cabin only to be terrorized by supernatural evils—takes a post-modern turn that gives Scream a run for its money.

A slain cop wakes to find himself undead and joins up with his friend to become vigilantes for justice and bad guy flesh in the horror comedy The Revenant. He soon discovers, however, that he’s not the only zombie in town. Lovers of Evil Dead II will dig this inventive gore fest.

The Idiotbox: A living legend of comedy, Steve Martin burst onto the scene in the ‘70s with his TV appearances and specials. Steve Martin: The Television Stuff collects all of his early work, from his first TV appearance, playing banjo on “Dusty’s Attic,” to his stand-up and sketch specials to clips from his many “SNL” appearances and more. It’s a treasure trove of comedy with guest stars like John Belushi and Bill Murray.

There’s more trouble in paradise as “Hawaii Five-0” returns with Season 2. This action-packed reboot follows an elite task force taking on corruption and crime bosses in Hawaii. This season finds detective McGarrett arrested for the murder of the governor, and Danno’s daughter kidnapped.

The leviathans are freed from Purgatory, immune to weapons and hunting the Winchesters in “Supernatural:” Season 7. Meanwhile, Dean and Sam are on their own on when their mentor Bobby is cut down.

Jennifer Saunders and Joanna Lumley return to their iconic roles in “Absolutely Fabulous:” 20th Anniversary Specials. This British TV favorite follows two hard-drinking fashionistas who are a tad past their prime in three all-new specials, which nabbed writer-star Saunders a 2012 BAFTA award.

Stranger Than Fiction: A vital and timely look at a subject no one wants to talk about, Surviving Progress examines how the same technological advances that have improved our quality of life are also steadily leading to our demise. Jane Goodall, Margaret Atwood, Stephen Hawking and other luminaries weigh in on the planet’s ability to keep up with us.

From the Vault: Stacy Keach and James Earl Jones star in the cult art house film End of the Road. Premiering in 1970, Aram Avakian’s adaptation of John Barth’s novel is a strange philosophical journey through the post-‘60s hangover set in a bizarre psychiatric retreat.