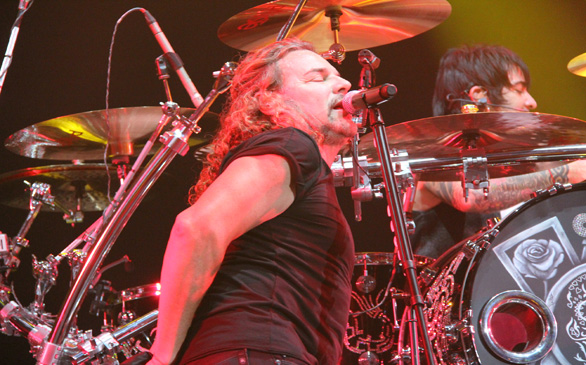 Universally acclaimed Mexican rock band Maná made a unique stop to Southern California when the music act performed at Citizens Business Bank Arena in Ontario before a near sold out show Tuesday night.

It was truly an event like no other, given the different venue, area and weather conditions during this month of September. Nevertheless, that did not matter one bit for these distinguished music artists and their fans, who joyfully attended to not only support Maná, but to witness an electrifying show filled with non-stop hit tracks.

Known as the pioneers of Spanish rock, the quartet consists of singer-songwriter Fher Olvera, drummer Alex González, guitarist Sergio Vallín and bassist Juan Calleros. Olvera also plays the guitar while González occasionally sings. They all appeared on stage at the same time, as always, and that's a popular act of them - it means they are a team. Within the group, no one is greater than the other; their integrity over the years has been beyond admirable, to say the least.

Maná began with the infectious "Oye Mi Amor" from the 1992 album ¿Dónde Jugarán Los Niños?. This track, arguably its most popular tune, was perfect as the opener. It provided an already energized crowd more adrenaline to go along with its ecstatic demeanor. "Dejame Entrar" followed, and that just added even more thrilling moments.

Although Vallin's solo was a true piece of art, González's lone drum playing for more than seven minutes elevated the audience's satisfaction. Near the end, he drank a delicious Corona. But González's singing in "Me Vale" truly cultivated several genuine memories; it's a track detailing someone's passion towards not caring about what people think or say.

"El Muelle de San Blás" and "Rayando el Sol" came before the encore, which included "Labios Compartidos" and "Corazón Espinado." In all and as always, Maná granted a fabulous night for those in attendance.