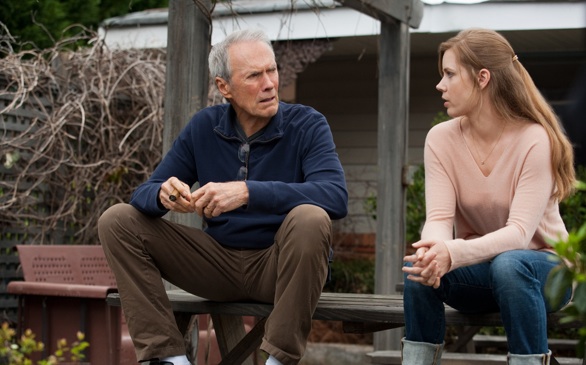 There was an air of anticipation as an all-star line-up, including Clint Eastwood, Amy Adams, Justin Timberlake and Matthew Lillard, walked in a roomful of reporters Friday afternoon at the Four Seasons. Accompanied by director Robert Lorenz and screenwriter Randy Brown, they where there to talk about their latest film, Trouble with the Curve.

Eastwood’s jovial presence vastly differs from the tough old man he’s played in his past few movies. This includes Gus, the ripened baseball scout whose alienating behavior towards his daughter Mickey (Adams) becomes the central theme of his current movie.

“When you get to a certain age, you’re just glad to be there,” the 82-year old Eastwood says, just one of the many times he’s made the whole room erupt with laughter.  “You have to be a realist so you have to look for roles in the age you’re in. It would be kind of ridiculous to say, ‘Oh I want to play this 35 year old guy.’ You have to get a sandblasting machine out. Be realistic about where you are in life. I’ve enjoyed it.”

The Hollywood legend’s last starring role in a film where he wasn’t director was 1993’s In the Line of Fire. This time, he worked under the helm of Lorenz, a long-time collaborator, on his feature film debut.

“I had to make no adjustments at all. I’ve always maintained that there’s more than one way of doing things,” says Eastwood. “I just put it in my mind that somebody else is going to pilot the ship that’s all. And it’s actually kind of relaxing. When these fellows weren’t working, you know, I was practicing putting or something. But that’s a great relaxing thing and won’t do both again, at least for the moment. But [then again] I said I wasn’t going to act again a few years ago, and that changed too so sometimes…sometimes you just lie.”

Adams, on the other hand, is at her prime at 38. Fresh from a very different role in Paul Thomas Anderson’s The Master, a film associated with the founding of Scientology, the actress finds a more relatable role in Mickey.

“I always enjoy trying to accept challenges and play roles that are different,” Adams relates. “It was a lot of fun playing a contemporary character. Someone I could have been friends with and who has a lot of the same issues that I have. That was really a great challenge because I felt exposed and vulnerable playing someone who’s so similar to myself and at the same time it was such a great opportunity to explore a father and daughter relationship. You don’t see that lot in film.”

She adds, “To lose in myself in a character like that [in The Master] does not quite feel as good at the end of the day. Let’s just put it that way.”

Asked about how it felt to work with a legend like Eastwood, Timberlake responds in an almost flabbergasted way. “If you had told me a year before that I was going to get to sit in a bar and drink scotch with Mr. Eastwood, I would have laughed at you. And then I would’ve cried because I would’ve felt that I would never have gotten that opportunity.”

The conference ends with the big elephant in the room exposed. A reporter asked about Eastwood’s now infamous moment at the Republican National Convention.

To this he responds: “Well it didn’t get the response that I wanted because I was hoping they would nominate me. My ambitions were tremendous,” again his audience explodes in laughter. “I don’t know what the response was. My only message was I just wanted people to take the idolizing factor out of every contestant out there. Look at the work, and look at the background, and make a judgment from that. I was just trying to say that, and I did it in a roundabout way, which took a lot more time than they would have liked.”

Trouble with the Curve is in theaters Friday, September 21.