V/H/S in a Digital World: The movie takes film-found footage storytelling to the next level. 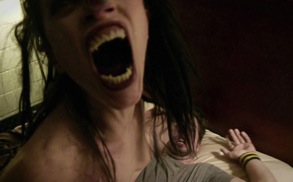 It seems like only yesterday that America was hunkered over the entertainment center as we were forced to rewind that hunkering VHS copy of Nightmare On Elm Street 3: Dream Warriors on its way back to Blockbuster Video.  And while the format may have evolved, our strange and primal desire to be terrified has hardly dissipated.

With the pulse pounding success of the Paranormal Activity franchise (and the subsequent half dozen knock offs), there seems to be something to this format. Documentary style, handheld and at times dizzyingly hard to focus on as the protagonist runs around trying to escape whatever might be chasing him/her.

V/H/S is not like these movies. Well, it is…but not exactly. V/H/S is, in essence, an anthology film: a relatively old subgenre that combines several short films with a broader theme. The theme in V/H/S is that all the shorts are (you guessed it) film-found footage style, not unlike the Paranormal Activity movies.

V/H/S was a project that brought together six directors who were each given the simple task of making a horrific, terrifying found footage short.

With his conventional, throwback style of horror filmmaking, director Ti West would not generally be considered a connoisseur of this YouTube style of cinema.

“I like the traditional filmmaking so to me composition and all that stuff is very important,” says West. “[But] I’ve always wanted to making something in the documentary style so essentially I just treated it as a documentary, and that was really appealing to me.”

The found footage sub-genre, which extensively started with The Blair Witch Project back in 1999, initially had this element of faux-reality, marketing the films on the idea that these events actually happened. This has continued, much to the frustration of West.

“Whenever a movie comes out and says that ‘Oh my, these tapes were found and on these tapes there’s something you cant handle’ it’s like…really guys, come on; I can handle it just fine,” says West. “That’s incredibly frustrating because it’s not the found footage…it’s the derivativeness that bothers people.”

However, whether used as a gimmick or not, this filmmaking style is here to stay.

“I watch more interesting stuff on YouTube than I see in a movie theater anymore,” says West. “There’s a reality that everything we watch is this sort of new media Internet format that we’re so used to, particularly young people.”

It is also insanely, amazingly profitable.  With bottom of the barrel budgets (Paranormal Activity’s budget was around $15,000), studios can turn small investments into massive returns with relative ease. The Paranormal Activity franchise will be opening its fourth sequel in October and will most likely keep them coming as long as consumers continue to bite.

Thankfully, V/H/S is very much the opposite of a quick-cash grab. While watching this film, it’s immediately obvious that it is more than anything a blood-soaked love letter to the genre. Each film has its own style, from a Friday the 13th-channeling slasher to a haunted house ghost story and bits of everything in between.

With Halloween quickly approaching, V/H/S represents not only the best bloody, diabolical and wild ride of the season, but it is a poignant reminder of just how far we’ve evolved in this art of cinematic terror.

V/H/S is now available on all VOD platforms and will hit theaters in limited release October 5.