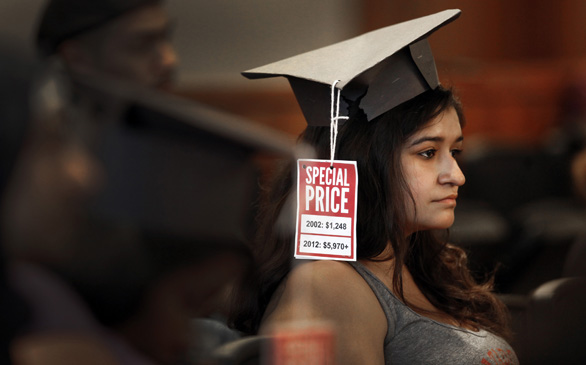 California State University trustees on Wednesday approved a plan to raise tuition 5 percent next year should a November tax measure fail and trigger deep funding cuts to the 23-campus system.

Failure of Proposition 30, backed by the governor, would trigger a $250 million funding cut to the Cal State system. The 5 percent tuition hike - equal to $150 per semester - would raise an estimated $58 million in revenue for 2012-13, officials said.

Beginning January 2013, annual undergraduate tuition at the system's 23 campuses would rise to $6,270, not including school-based fees, books and other costs.

A small group of student protesters attended the meeting, chanting "No Cuts, No Fees, Education Should be Free."

Trustees also approved a plan to increase per-unit costs for nonresident students by 7 percent, from $372 to $399.

Proposition 30 would raise billions of dollars to help close the state's budget deficit by temporarily increasing sales levies and income taxes on high earners. Some of the revenues would be dedicated to K-12 schools and colleges.

If the measure passes, Cal State would forego the January hike and also roll back a 9 percent tuition hike that took effect this fall and was expected to raise $132 million in revenue. The system would have to refund tuition checks, grant tuition credit and recalculate financial aid packages for most of its 412,000 students.

But it would receive $125 million in state funding as part of next year's budget as well $50 million this year in one-time revenues from an extended education reserve fund.

Cal State officials said a midyear funding cut would devastate the system, with about 20,000 qualified students turned away, 5,500 class sections slashed and 1,500 faculty and staff reductions.