Asher Monroe is Earning Respect: The former boy band member establishes himself as a solo artist with singles like, "Here with You." 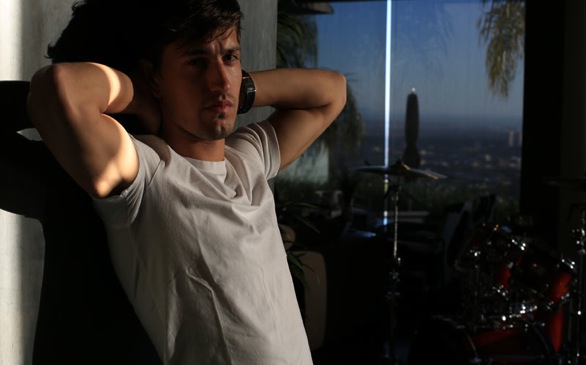 It’s not uncommon for band members to eventually break away and do their own thing. Take a look at Justin Timberlake and Beyoncé; both were able to climb to solo stardom after leaving their respected groups. The next artist who is hoping to achieve the same level of success is pop singer, Asher Monroe.

You might recognize Monroe from the movie Fame, the television series “Parenthood” and, most notably, the pop/R&B/urban boy band, V Factory.  After all, he was the front man of the quintet until he left to embark on a solo career in 2010. Now two years later, the 24-year-old is making a name from himself in the pop music world as a solo artist.

“[V Factory] was a good experience for me,” says Monroe. “I enjoyed traveling, gaining the fans that we did, having songs on the radio…all of that was the first real taste of what I’m doing now."

So what is Monroe doing now? After performing on DigiTour 2012 (a tour the highlights the most popular YouTube musicians) with artists like DeStorm and Ricky Ricarelli this spring, Monroe is busy putting out singles and music videos previewing his debut album (which is still in the works and pending a release date).

Last month, Monroe released the music video of his newest single “Here with You” (produced by One Republic’s Ryan Tedder) on YouTube, which currently has more than 250,000 hits and continues to climb. “Here with You” is a pop/dance track, and the video portrays probably the most fun dance party of the year.

“I have this house that I use as a studio,” says Monroe about the video. “It’s such a great space, and I haven’t had a lot of people in my prior music videos; I didn’t have the friends and crowd. With the song, it had a high-energy feeling, and I wanted to transform the house into the ultimate party.”

In the past, Monroe’s videos had crazy success on YouTube.  His earlier single “Hello Baby” got about 1.2 million hits and “Every Night” reached just over 2.6 million. He hopes that “Here with You” will get the same results. The video was already featured on MTV’s “Buzzworthy” Blog and Perez Hilton.

In his first few years as a solo artist, Monroe is finding that respect is the main obstacle for him to overcome.

“This will happen in time, and I think it happens with every artist: [The biggest challenges is] just gradually getting respect from you peers,” says Monroe. “I really want to be eventually respected as more of a musician. And obviously, that’s just with time, practice and everything else. “

Meanwhile, Monroe continues to differentiate himself from an actor and former boy band member to a solo artist, and is doing so with great success.

“I definitely have gained new fans based on the new stuff I’ve been putting out, which is good,” says Monroe. “Of course I’ve found fans who remember me from the movie [Fame] or V Factory, but I think a true fan will follow you through anything you do.”

One thing that sets Monroe apart from other artists is that he is taking a more alternative path to making it big.

“I’m doing it different because I’m not trying to get signed (at least for now),” explains Monroe. “I’m not going that typical route.  I have the whole radio side ready, I have the sponsorship, I have everything...So now it’s just me having that full control.”

With control over his music, Monroe is able to fully participate in the music making process. From songwriting to producing to creating the music videos -- he's hands-on with it all.

“I just like to be involved as much as I can,” says Monroe.  “I don’t like to send it to somebody and say, ‘Oh, do your thing and get back to me.’ I like to be really involved.”

With a free showcase in New York, a radio promotion tour and a new album on the way, Monroe is ready to show the world the new music he’s been working on since being solo.

“I think my music is definitely shining,” he says. “It’s really been nice to hone my craft so much more."