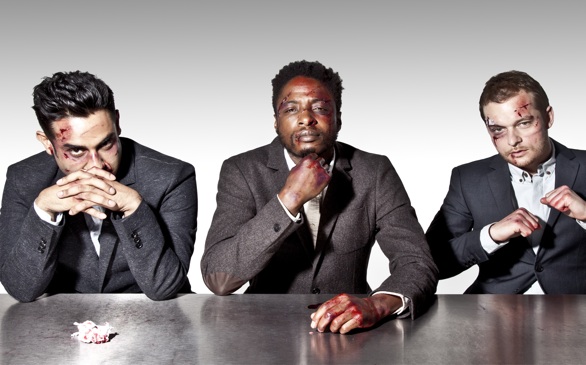 U.K.'s celebrated grime and dub-step group Foreign Beggars returns with the launch of its new album, The Uprising. Since 2002 this group has taken the British scene by storm with their unique blend of U.K.-flavored hip-hop grime, bass-drenched dubstep and multi-layered electronic arrangements.

From the beginning I expected genre-defying blend of sounds, but more than that what I heard in this album was more of a clumsy mesh of genres that doesn’t flow smoothly. “Palm of My Hand” is the first glimpse of the bands music after signing to mau5trap Records, the label recently setup by the mouse-shaped headpiece wearing, super DJ, Deadmau5.

Maybe it’s just not my cup of tea, and die-hard fans will be grooving to the, "speaker busting" sounds. This music is interesting, but not free flowing and while some bits sounds powerful and as strong as Skrillex, most of it is just okay.

Other tracks include “Amen” produced by fellow Londoner Burns, “Anywhere” features London-based vocalist D.Ablo and “Apex,” produced by world-renowned electronic group Knife Party. “Minds Eye” produced by Millions Like Us and featuring the legendary Tommy Lee on drums.  It sounds like a party of dance bad-asses, that should blow your mind, but all the different influences may have overshadowed the uniqueness of the group’s sound. The 8-bit frequencies that pulse throughout the beat are reminiscent of a Nintendo game from the late ‘90s, but unless you’re winning points and killing bad guys, they quickly become annoying.

They were trying to achieve an unprecedented marriage between primal hip-hop culture and bombastic bass that would appeal to the masses, but The Uprising might be better suited for underground audiences on this side of the pond. Noted, this album is flooded with talent, which is why it was surprising that none of the tracks were truly memorable.