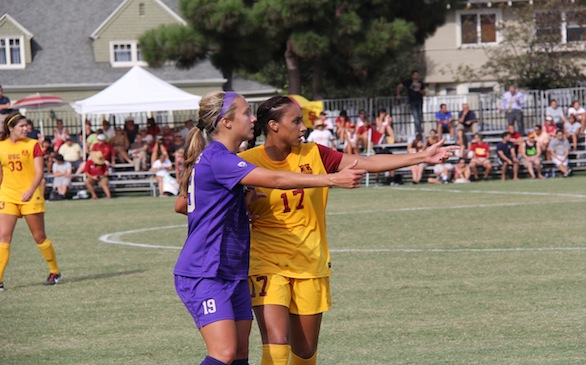 With 11 seconds remaining in the first half of overtime, senior Samantha Johnson netted the game-winning goal for the USC Trojans women's soccer team over the visiting Washington Huskies Friday afternoon at McAlister Field before 275 fans.

“Finally,” USC head coach Ali Khosroshahin says. “[We] finally put a zero up there. That’s been the discussion all week about just not giving goals away…we’ve been working really hard.”

Johnson’s goal arrived inside the box, just left of the penalty kick spot. The Washington defense couldn’t manage to clear Marlee Carrillo’s long throw-in from the right flank. After the ball landed Johnson’s way when Elizabeth Eddy re-directed it, Johnson fired a potent shot that found the back of the net to give the Women of Troy a victory.

“I was just hoping someone would get it,” Johnson says of her goal. “I didn’t care who it was. We all just tried to work hard for each other.”

From the beginning, the Trojans formulated several offensive attacks that produced numerous scoring opportunities. Nothing fell their way, however, sparking some frustration among players and coaches throughout the first two halves of play.

“It is frustrating for the offense because it is a lot of pressure on the defense,” Johnson says.

“Absolutely,” he says. “I thought their goalkeeper had a tremendous match. She made some great saves for [Washington].”

For the game, Davidson made seven saves while Caroline Stanley registered four. USC outshot Washington, 24-9, including 7-0 in OT.

“We just kept talking about getting numbers forward and taking care of the ball,” Khosroshahin says, noting USC’s effort to push for a win in OT. “I thought we did a good job at that.”

USC next plays Friday, Sept. 28, at Arizona State in the first of five consecutive contests they have on the road. The team doesn’t host a match until entertaining Utah on Oct. 17 at 3:30 p.m.

“I am not very at fortune telling,” Khosroshahin says.