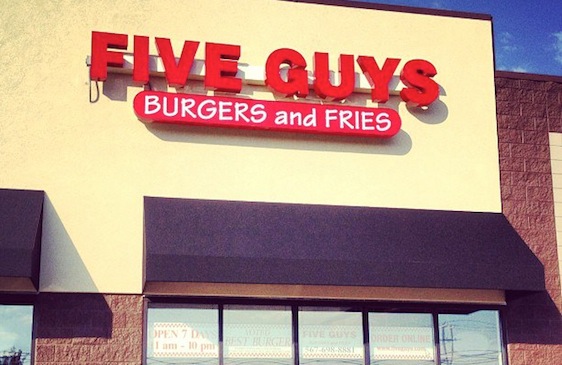 Five Guys Burgers and Fries is the new favorite of burger chains, according to a survey that questioned over 7,500 consumers. Conducted by Force, the survey's favorite was calculated based on total votes and then factored in the number of locations for each chain. According to a report by the Los Angeles Times, Five Guys led the list within every region.

Five Guys ranked best in categories including food quality and taste, service, cleanliness and atmosphere. In-N-Out won the only category that Five Guys didn't win, which was best overall value.In-N-Out placed second, followed by Fuddruckers, A&W and Smashburger. Dairy Queen ranked last in the group of 16 chains considered. Burger King, Hardee’s, McDonald’s and Jack in the Box rounded out the bottom five.