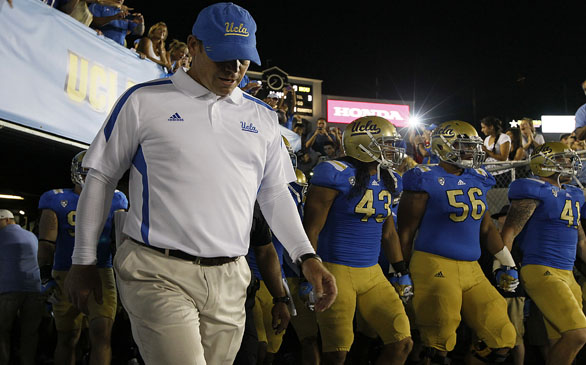 The USC Trojans won, and they remained at No. 13. Meanwhile, the UCLA Bruins suffered a defeat, and they're now out of the AP Top 25 rankings. Both Pac-12 teams are currently 3-1 overall, but the Trojans do carry a 1-1 record in conference play. The Bruins are 0-1.

USC took care of business at home while entertaining the California Bears that featured a 27-9 victory at the Los Angeles Coliseum Saturday. Senior quarterback Matt Barkley finished with 192 yards passing and two touchdowns, but did throw two interceptions.

"I'm not looking out every week to get stats or get a flashy game," Barkley told the media after the game. "I think we left a lot of points on the field ... but we were moving the ball today. If defenses are going to stay back, play a cover-2 shell and force us to run, that's what we've got to do."

The Bruins 3-0 start was more of a cinderella story than anything else, in some regards that is. Their 27-20 upsetting loss to the visiting Oregon State Beavers surprised many, but it didn't to others. This was a game that the Bruins truly should have won to keep their momentum going within the Pac-12 standings. Unfortunately, things didn't go their way.

"That was a tough loss, obviously, but our hats are off to Oregon State," UCLA head coach Jim Mora said to reporters afterwards. "That's a good defensive football team and a well-coached football team and they beat us. They have a very good run defense. They are big and physical up front."

Brett Hundley contributed 372 yards and one TD on the air. Shaquelle Evans had six receptions for 148 yards and one TD. Johnathan Franklin only managed 45 yards on the ground, well below his average rate.

UCLA next plays at Colorado Saturday, Sept. 29 at 3 p.m. USC travels to Utah for a clash against the Utes on Thursday, Oct. 4 at 6 p.m.

For more information on the AP Top 25 rankings, click here.