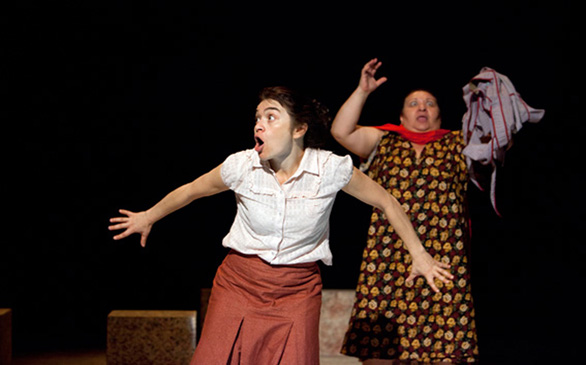 Julieta Ortiz and Norma Angelica in a scene of “Rome at the End of the Line.”
(Credit: Andrea Lopez)

Two of the finest actresses from Mexico combine their talents to deliver a very entertaining theatrical comedy. They are Julieta Ortiz and Norma Angelica in the play “Rome at the End of the Line,” which is now playing at 24th St. Theatre.

It'd been a long time since I attended a play for review, and I must admit that this particular piece sparked motivation in me. It's hilarious, dramatic, and it provides an immense segment of theatre satisfaction.

In Spanish but with English subtitles on a screen at the back of the stage, “Rome at the End of the Line” details the story of two young girls at the age of seven. They seem to sport a grand desire to leave their city en route to embarking on a joyful trip to Rome, Italy. That's their dream; it truly is.

The award-winning 24th ST. Theatre is well-known creating provocative theatre for all ages. “Rome at the End of the Line,” written by Daniel Serrano, hits the sweet spot. Ortiz and Angelica, who held their first rehearsal via Skype through a computer, shine individually and as duo. Together, they cultivate a sensational 85 minutes of pure and non-stop entertainment from beginning to end.

As the plot progresses, the audience learns that both characters (Emilia and Evangelina) are tied to one another via the small town's train tracks. At separate instances, Emilia and Evangelina return to the tracks at ages 13, 20, 40, 60 and 80. While sharing their dreams, worries and love stories, both women experience the inexperienced moments they could and should have had.

Emilia and Evangelina (Ortiz and Angelica, respectively) engage the public with their profound connection. Throughout, people in attendance couldn't stop laughing nor cheering for some of the most unique, catchy lines within the play. Alberto Lomnitz's direction in it is superb, too.

For its genuine comedy and original score, “Rome at the End of the Line” is one of the best theatrical sets that the city of Los Angeles has ever hosted. It's a must watch.

For more information on “Rome at the End of the Line”, click here.