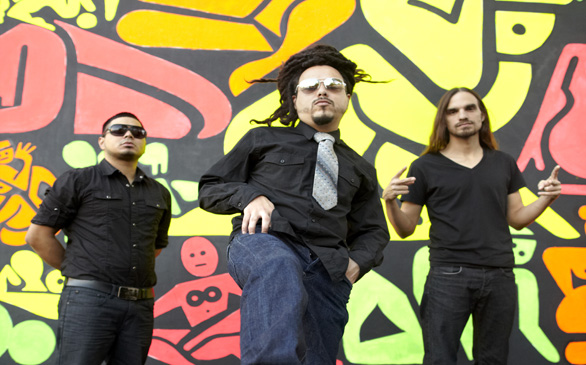 Locos Por Juana sport a new album, Somos De La Calle (We Are From the Streets).

It's not that often that music lovers get to listen to a distinguished sound - one that enhances their knowledge not just about rhythms, but of compelling genres as well. That's the art and eclectic talent of Locos Por Juana.

Locos Por Juana, an infectious band that found its origin in Miami around the early 2000s, have revolutionized the concept of fusing. In English, Locos Por Juana means “crazy about Jane.”

“Juana is a mystical character we all write to,” lead vocalist Itagui Correa confesses while describing the artistic name they carry. “…Basically, Juana is that 'thing' everybody is looking for.”

Locos Por Juana have indeed found what they’ve searched for.

The group is a five-member act composed of Correa, guitarist Mark Kondrat, drummer Javier Delgado and Jose Gonzalez and Lasim Richards on the horns. All together, they're some of the most distinctive musicians on the face of the earth.

Over the years, the roots of Locos Por Juana have been noticeable in its music catalogue. The band blends Latin, Caribbean and American rhythms. Just imagine a mixture of upbeat cumbia, dazzling reggae and electrifying hip-hop.

Correa suggests that their music holds a special meaning not only because of their desire in honoring certain people, but also for particular messages each melody possesses. Many of the band's themes revolve around immigration, politics and human rights, among others.

“Our music is a tribute to all the immigrants who are far away from their countries while looking for a better life,” admits Correa, who adds thrilling and pulsating vocals to Locos Por Juana’s lyrics. “I think our sound is that sound of friends who met in Miami who connected through music…we are also a social conscious party because we always have a message to deliver.”

Correa and Delgado were born in Colombia, while Kondrat is a Miami-born individual with Colombian descent. Much of this South American nation’s rich music is utilized in their repertoire, as they contribute positive vibes to the world. But they also have Puerto Rican and Venezuelan blends.

“We even have a little bit of Cuban in us,” Correa says, adding that living in Miami has been instrumental to the group’s diversity and ability to produce beyond original tracks. “That happens even though we don’t have any Cuban members in the band. Being in Miami, you get a little taste of everything.”

The champeta, Afro-Colombian, rock, funk, ragga and dancehall rhythms are also prominent in their tunes.

Their latest release in Somos De La Calle (We Are From The Street), which is now available, proves the ensemble’s grand talent to fuse music into perfection while discharging a re-shape of rhythms.

“Somos De La Calle is about the entire work we have done throughout the time we have been together as a group,” Correa says. “I believe the album does talk about us being from the streets since we are always on some path – interstate, on a plane, a city or another country. It shows you a little bit of where you are from and you get to know some culture. For us, that’s the most important thing out of this album; we were able to identify ourselves as that because the album details the experiences we’ve all had on the streets driving from one city to another while getting to know different characters that inspired us to compose the songs we wrote.”

He adds, “This time around, we focused a lot on the album so that it could reach people’s hearts, which is the most important thing.”

Somos De La Calle carries 12 total tracks, including an immensely likeable “Revolution Ska (La Música).” From a rhythmic perspective, the song is up-tempo while carrying a positive, but revolutionary theme in its lyrics.

“Nowadays, radio stations are very saturated,” Correa points out, noting that ska has gone unrecognized for a while. “That’s why we decided to make this song…it’s to make a ska revolution on the radio, so that it could be played often.”

Correa went on to mention that the group continued its effort to formulate different pieces, while paying tribute to bands that have inspired them in their career – such as Maldita Vecindad and Los Fabulosos Cadillacs.

A fun and interesting fact to know is that both music acts hang out together quite often. Every time the members of Locos Por Juana visit California, they spend significant time at Palenke Soultribe’s residence. And vice versa, when Palenke Soultribe travels to Florida, Locos Por Juana hosts them with wide-open arms. Even though they are friends and colleagues, it’s indeed a family-like bond that unites them.

Locos Por Juana, a Grammy and Latin Grammy nominee entity, began their route to success in 2002 with the release of their self-titled record, Locos Por Juana. The album earned the band a nomination for Premio Lo Nuestro’s Best Urban Artist award.

The releases of Musica Pa’l Pueblo (2005), La Verdad (2008) and Evolucion (2010) have cemented the band's name in the Latin scene. Nevertheless, its fan base continues to exponentially grow, as crowds from diverse ethnicities and cultures genuinely gain appreciation and respect for Locos Por Juana’s undeniable intent at achieving musical originality.

Locos Por Juana, who are as musically endearing as they are musically multicultural, keep delivering contagious tracks, performances and humbly offer a lot to talk about. Their originality is admirable.

“For us, it is very important because we continue our tradition,” Correa says in regards to their originality, signaling that Latin America’s music and Spanish language have been  influential. “Knowing that we all speak the same language makes us strong. We have a desire to keep laboring those rhythms since we have been able to entice people to dance for a long time. It’s important to continue fusing rhythms.”