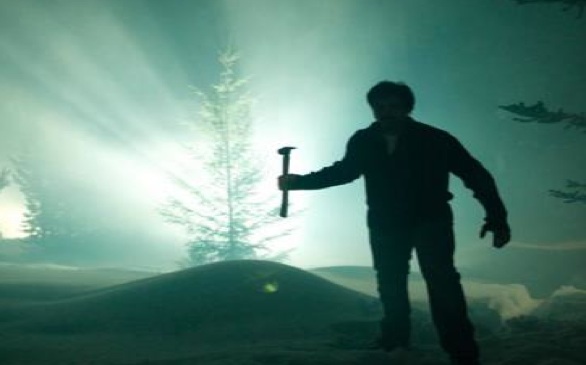 The film Barricade, produced by WWE studios and directed by Andrew Currie, connects the fascinating theme of a lovely vacation with the terrifying presence of unknown creatures in an isolated cabin.

Terrence Shade (Eric McCormack from “Will & Grace”) decides to go on a quiet vacation to the private cabin in the woods. His daughter Cynthia (Conner Dwelly) and his son Jake (Ryan Grantham) are sad that their mom is not with them anymore but are still excited that their father is spending time with them despite his busy schedule. This happy family trip ends up in a horrific experience as Terrence notices an unidentified creature outside the window, Cynthia claiming that something is after them and Jake getting sick without an apparent reason. Terrence tries to stay calm and protect his kids, but he has a hard time as the blizzards barricade them and mysterious illusions disturb him.

The use of string music that enhances the horrendous atmosphere, unknown creatures popping out, ghastly flashbacks about the death of Terrence’s wife and frightening delusions that he observes are sometimes effective in scaring the audience. Nailing the whole house and blocking them from the outside world tells the audience the start of the appalling vacation with the monsters.

However, it is overall confusing for the audience. For example, why are the flashbacks about Terrence’s wife and Terrence’s medications necessary parts of the film? A fight for survival in the barricade and the head of a household going insane are unique features in the movie, but they do not create exciting moments. The mystery of what is real and what’s not for Terrence does not create suspense; it confuses the audience even more.

An upside to this film is its location and set design. The movie was shot at Manning Provincial Park with harsh weather conditions and craggy forests. During the day, the scenes were very beautiful with tall, magnificent trees, pure white snow on the ground and an overall peaceful atmosphere. However, at night it completely changed into a nightmarish world: misty fog, mysterious footsteps in the snow, creepy whispers and leaves shaking in the trees add to the horrifying nature of the film.

But despite the impressive set and scary surprises, the film lacked a concrete ending, leaving the viewer with unanswered questions. People who like scary movies and a decent twist will enjoy this movie. Others will not.