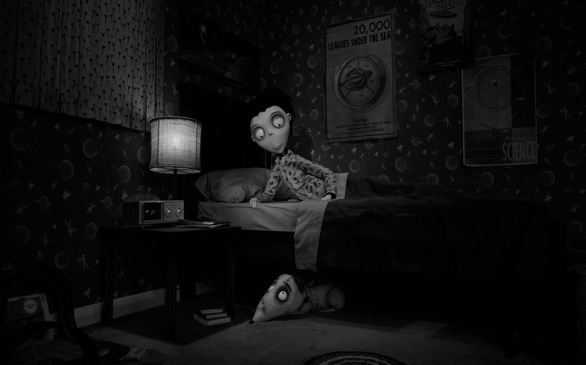 Frankenweenie tells the story of young Victor Frankenstein and his dog.
(Credit: Facebook.com/Frankenweenie)

Acclaimed and beloved director Tim Burton is making history. His latest film, Frankenweenie, is the first stop-motion animated feature film in black and white and in 3D. Also, the sets and puppets were created on a grey scale, as Burton reveals, to help the animators get it right.

“If it had all been in color, it would have looked like a cheesy children’s morning stop-motion show as opposed to feeling the environment as an animator,” said Burton. “It’s the difference for an actor if they’re in front of a green screen acting versus if they’re in the real environment. It changes them. They get the reality of it.”

Frankenweenie is a project close to Burton’s heart. He made a short, live-action version in 1984. Now, with the progress made in technology and filmmaking, the 21st century was a good time to dust off his original drawings and put new life into the story. Burton employed many familiar names to voice the characters, many of whom he’s worked with in the past and jumped at the opportunity, even if he had an unusual plan for the role(s) they would play.

“When Tim Burton tells you, ‘I want you to play three voices,’ it’s so unusual,” said actor/comedian Martin Short. “But you don’t want to blow it, so you don’t bring it up. I remember having a conversation with him the first day about Peter Sellers and Dr. Strangelove and how oddly effective it was because he was able to make these three characters so individual. Why [Burton] thought that was better for the film, I don’t know.”

Like most of Burton’s protagonists, Victor Frankenstein (Charlie Tahan) is a bright boy but an outcast at school. His only true friend is his dog, Sparky (Frank Welker) with whom he does everything. His parents (Catherine O’Hara and Martin Short) worried that Victor is too obsessed with science and lacks interactions with kids his age, urge him to take up baseball. However, America’s pastime proves fatal to happy-go-lucky Sparky who is hit by a car and off to doggie heaven.

Struck with an unending grief and longing for his beloved pet, Victor concocts an ingenious plan to bring Sparky back to life. True to his name, Victor Frankenstein creates a laboratory in the attic of his home. With the help of lightning and some metal kitchen appliances, Sparky is alive!

All is well until the hunchback of class, Edgar E. Gore (Atticus Shaffer), spots the newly revived Sparky and devises a plan to steal Victor’s life machine to win the science fair. Naturally, his big mouth spreads word to the other kids, and old pets are coming back to life left and right, except this time with a vengeance.

For Shaffer, who has a background in both voice-over and live-action, the hardest workers in Hollywood are those who cannot rely on the human vessel and the physical world, but who must create it all from scratch.

“This is something that is being created,” said 14-year-old Shaffer. “As human beings and in theatrical, we’ve already been created. We’re just putting different make-up, putting different personas on and that’s the character. With something like this, everything is handmade. You have the handmade puppets, and then those puppets are animated and given movement from the animators. They’re given a voice by us, as the actors, and then they’re given a world to live in because of the set builders. It’s this whole team of all these people to create this one character’s world. Being able to create that world, it’s absolutely fantastic.”

In Frankenweenie, Burton pays his respects to the horror films of yesteryear that influenced his upbringing and eventual taste as a director and producer.

“Those are the films that spoke to me,” said the director, donning his characteristic Ray Bans even in doors. “Everyone has a different genre – everybody’s got their thing. For me, those movies spoke to my emotional life in the sense that all those movies, if you felt weird or outcast or lowly, you’d relate to the monsters. Frankenstein and most of the monsters were misunderstood characters, and I feel like most children feel that way and it’s easy to identify with those characters. They help you through your emotional life as you’re growing up when you don’t really understand everything on intellectual level.”

Burton, who is an artist in his own right, has brought us popular creepy characters from his past works, The Nightmare Before Christmas and Corpse Bride. But this time, though he’s outdone himself in creating scary-looking figures, there’s an overwhelming aspect of endearment to them as well. Throughout his career, Burton has made films that spoke to his sensibilities, which, he says, goes back to his upbringing.

“Whatever feelings you had a child, you never really lose them,” he said. “If you feel a certain way, it doesn’t matter what happens to you later in life, you retain those feelings. It’s always been important, not to stay there, but just remember seeing things in a different way.”