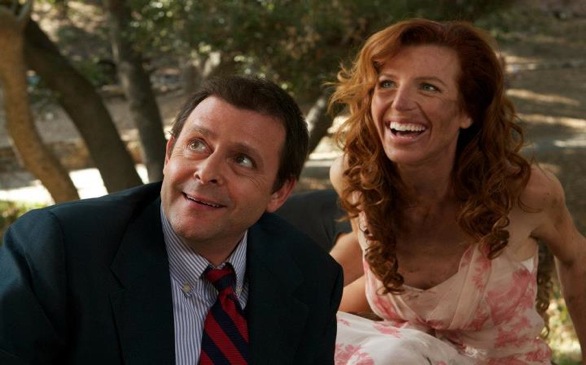 Just 45 Minutes from Broadway tells the story of the Isaac family, a family of actors living in a country house in upstate New York that’s just 45 minutes away from Broadway (hence, the movie title).  In the film, the family struggles to find paid-acting gigs, and relationships are put to the test as one sister becomes engaged and the other breaks up with her boyfriend.

When Betsy (who is the one non-actor in the family) comes back in town to announce her engagement to her fiancé James (Judd Nelson), Panda and the family are forced to deal with buried family secrets as relationships start to dissolve.

Just 45 Minutes from Broadway was originally a play performed in Los Angeles in 2009.  Three years later, playwright Henry Jaglom transformed it into a movie starring all of the same actors except one – Nelson.

Nelson did not play James in the play (David Garver played the part), even though he did initially consider doing so. Instead, he joined the cast when it was decided Just 45 Minutes from Broadway would hit the silver screen.

“The idea of doing the movie was more attractive,” says Nelson.  “It was a more finite period of time, so it worked out for me.”

Even though the cast had months and months of preparation and rehearsal from performing the play before filming, Nelson did not.  He admits he would have preferred a little more practice.

“I wanted to have a lot of rehearsal; I was not on the same page,” says Nelson.  “But I acted the acting, making it appear as though I was caught up.”

His “acting the acting” fooled the cast, including Frederick. She says Nelson fit right in with everyone as Garver’s replacement.

“I love Judd,” says Frederick.  “He is incredibly intelligent and detailed as an actor… He didn’t lose his character, and he played the role flawlessly.”

For the rest of the cast, they’re biggest challenge was transforming the story from a play into a movie for the first time. After all, performing in front of cameras instead of a live audience is a big challenge as there are many subtle differences in the acting.  According to Frederick, they accomplished this feat.

“I was really surprised,” says Frederick.  “I’d thought we’d all be really stale…but it became real for us.  It was like this huge family that came to life.”

Nelson adds that transforming the play into a movie enhanced the story in different ways.

“The film shows you the offstage/onstage part of the play,” says Nelson.  “You can display Panda’s question of what’s real and what’s not [in the film]. Also, the set was beautiful.”

In the movie, Nelson’s character is a reserved lawyer suppressing his true artistic self deep inside, while Frederick plays an over-the-top actress dealing with intense heartache and sadness from the breakup with her boyfriend.  Because these actors are drastically different from their characters, Frederick and Nelson’s greatest accomplishment in this film was simply staying in character.

“It was a strange place to put myself into,” says Frederick.  “[Panda] is sad and in a dark place and doesn’t know what do with her career…but it was fun finding the comedy within the dismal place.”

“I’m not really like my character,” says Nelson. “I’m not trying to keep a secret.”

Throughout the movie, the argument about what is real and what is acting constantly arises. This is the main source of turmoil between Betsy and the rest of her family.  She feels as though her family, especially Panda, is constantly creating drama through acting and avoiding being their true selves.

However, Frederick says this binary between what is acting and what is normal is not as simple as black and white. In fact, she says it is the non-actors who are more dramatic.

“Actors are less of drama queens than ‘civilians’ [a term used to describe non-actors in the movie] because experienced actors know when they’re playing a part and know when they’re not,” explains Frederick.  “The people who create drama are not actors; it’s the people who aren’t in touch with different aspects of themselves that end up acting out.”

When the credits roll, Frederick hopes that audiences (including actors and non-actors alike) will walk away from this film with their chins a little higher after witnessing a family that is able to find happiness and pride throughout their situations.

“Actors have that inner sense of grandeur about themselves and their career, and they should be proud,” says Frederick. “I feel proud of what I do in my life, and I think that comes across in the film; it’s a great message.”

Just 45 Minutes from Broadway releases in Los Angeles on October 3.