Metric on the Road: Next Stop, The Greek 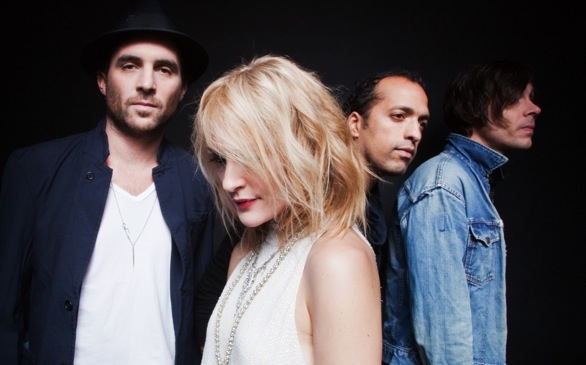 Metric hopes to captivate audiences when the band makes its debut at the Greek Theatre on October 9.
(Credit: Justing Broadbent (ilovemetric.com))

Everyone has a playlist that gets him or her through the day. Mine has the Metric’s album Synthetica on it with an impressive number of repeats. I have wanted to see them live and now I (and you) have the chance. On its North American tour this year, Metric will make its way to Southern California and most notably, the Greek Theatre on October 9.

When I spoke with Jimmy Shaw (Metric’s lead guitarist), he said the tour was going well. He and the band were outside Pittsburg making their way to the next stop.

"Every tour, we try to do something different. It has the ability to have such a repetitive nature, but we avoid that," said Shaw. "We don't have any repeat venues this time. We have never played [at] Radio City Music Hall or the Greek, and we'll be in there. They are just beautiful old venues and iconic locations."

Shaw also talked about music, touring, political opinions and the unusual writing process that brought Metric to us all. He said writing the music for the album came in an interesting way.

“I don’t think we over-conceptualized at all; we just went into the studio and did it,” Shaw explained. “We went into creative mode."

To create the songs, Metric pulled from a collection of previously made lyrics and beats.

"When a song wasn’t working quite right, we just scrapped it for parts,” said Shaw. “One lyrical line, a melody that we liked…we had those pieces and made the songs into what they are on the album."

When asked about their contact with the fans, Shaw was excited to say they are more than happy to have fun with the people that love their music.

“Josh gives away tickets every night; he’ll literally stick them to a tree and post a photo on Instagram and say, ‘Here are your tickets!’” said Shaw.

He also said that more than a few times, the band has watched as people ran to the location five minutes after the post to collect the tickets. The fans get involved and the band has fun with it.

The band posts on the blog to keep the fans informed. In this political climate, everyone is making his or her opinions known, and the band is no different. When asked if the conversations had been positive or confrontational, Shaw had only positive things to say.

“You know, if you hear our music and all you want to do is dance, that’s fine. If you want to have a little more depth then the conversation is there,” said Shaw. “We’re not forcing anyone to agree, but it is an important time to talk about what is going on.”

As of right now, Metric does not have any plans to collaborate with other artists.

"I wish I could say yes. I would love to have that,” said Shaw. “Honestly though, with all the touring right now, it's not something that can be planned."

However, I still have hope for a big collaboration in the works.

"You know, I say now that it won’t happen, but then I'll get home and jump right back into the recording studio. That has happened in the past,” said Shaw.

Metric will perform at the Greek Theatre on October 9.