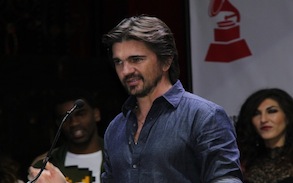 "I'm happy," admits an ecstatic Juanes, who received five nods. "I want to dedicate these nominations to my fans and my country."

"I feel very happy, very excited and honored to be here," says Juanes, who began his solo career in L.A. in 2000. "Eleven years ago, my career began with the [Latin Grammy's]. I'm just like wow. It's such a great opportunity to promote my album and also to celebrate my music." In 1998, he disbanded his rock group Ekhymosis before moving to LA. - where he became an international megastar.

Juanes, born Juan Esteban Aristizábal Vásquez in Medellín, Colombia, carries an impeccable music catalogue filled with chart-topping hits and top-selling albums, including his latest work Juanes MTV Unplugged. A winner of one Grammy and 17 Latin Grammy awards, Juanes' past and current success could be classified as an unmeasurable feat within the Latin music industry.

"I don't know. I just try to do the best from my heart and soul. I've loved music since I was a child," confesses a humble Juanes, who never imagined himself exercising another profession other than performing music. "I just give my life for [music]. It's something that I take extremely serious."

Juanes, as the other nominees, works plenty hard.

For Album of the Year, there are 10 nominees, including Ricardo Arjona (Independiente), Bebe (Un Pokito De Rocanrol), Juanes (MTV Unplugged), Reik (Peligro) and Arturo Sandoval (Dear Diz (Everyday I Think Of You)).

In the category of Record of the Year, Juanes and Ricardo Arjona compete against each other. Ricardo Arjona's sensational collaboration with Gaby Moreno in "Fuiste Tú" has experienced so much pulsating recognition over the music waves that it is being recognized as the potential record of the year for the Latin Grammy. Such is the case with Juanes and Joaquín Sabina in "Azul Sabina," a duo for the ages; it's just beautiful.

"Joaquín Sabina wrote this song about the problems we have in life. When you fall, the most important thing to have is enough strength to get up, keep going and never look back," Juanes says of the inspiring "Azul Sabina."

He added that the tune represents the New Orleans blues era of the 1950s. "I really love that time of music. So, I just really wanted to go back to those years and just do something about it."

For a complete look at the Latin Grammy nominees, click here.