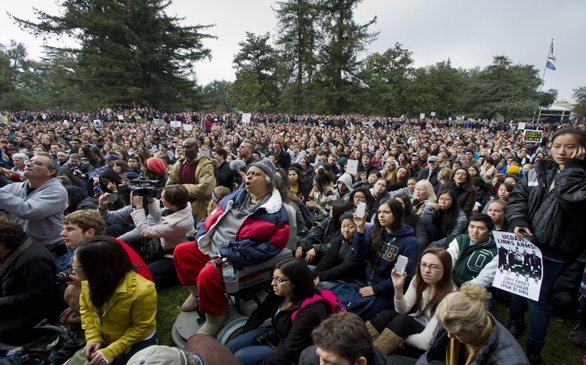 Protesters at the University of California, Davis in November of 2011.
(Credit: Manny Crisostomo/Sacramento Bee/MCT)

The University of California will pay damages of $30,000 to each of the 21 UC Davis students and alumni who were pepper-sprayed by campus police during an otherwise peaceful protest 10 months ago, the university system announced Wednesday.

The agreement, which must still be approved in federal court, also calls for UC to pay a total of $250,000 to the plaintiffs' attorneys and set aside a maximum of $100,000 to pay up to $20,000 to any other individuals who join the class-action lawsuit by proving they were either arrested or directly pepper-sprayed, a university statement said.

A video released online, showing an officer spraying seated students directly in their faces at close range during an Occupy rally, had triggered outrage.

And UC's own investigations and a shake-up at the UC Davis police force put the university in a weak position to argue against the students' lawsuit.

The preliminary settlement, which was approved by the UC regents in a closed-door meeting earlier this month, will be paid through the UC's self-insurance program, which officials said has about $600 million in reserves.

In May, a separate draft report about campus responses to civil disobedience across UC urged administrators to use mediation instead of confrontation in most cases, although it said pepper spray might remain a necessary tool of last resort. A final version was released this month with no major policy changes.