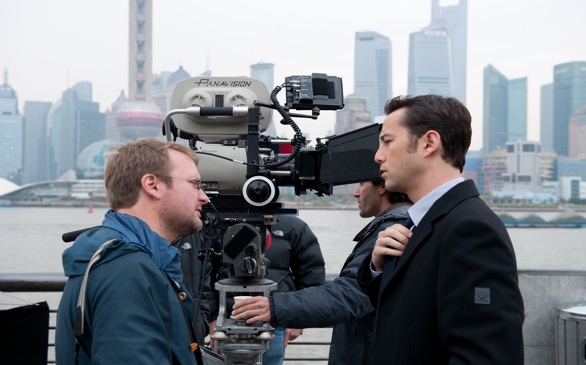 Time travel films are tricky. If done right that film will join the short list of sci-fi films that have been successes.  Most sci-fi films usually only incorporate time travel to explore yet another post-apocalyptic world and how to avoid that outcome.  Yet few films use time travel to venture into a deeper and philosophical question of your future self.

Enter Looper, the futuristic action thriller set in the year 2044 where time travel has been invented but only used by mobsters who send their targets 30 years into the past where a “looper” (a hired gun) waits to take him out. For Joe (Joseph Gordon-Levitt) a semi-detached loner who has France in his future plans, gets sidetrack when it’s his time to “close his loop.” Joe’s future self (Bruce Willis) is sent back for assassination, but Joe manages to loose him.

Although the same person, both Joe’s are fighting to keep their own futures from getting wiped. For future Joe, the quest is bringing down The Rainmaker, who controls all the crime syndicates in the future. Joe is determined to stop him, but he must face a deep-seeded moral choice.

For writer/director Rian Johnson (Brick, The Brothers Bloom), the idea of a time travel film came almost four years ago. Excited to delve into the sci-fi genre, Johnson remains true to his very present yet subtle understanding of emotional complexities.

“As a writer, time travel is a real tricky thing to jump into. As is in the case of this movie, the trick is to not make it feel complicated. I wanted it to be about the characters dealing with this situation and not be about the intricacies of timelines. It’s a lot more work to make something simple than it is to make it complicated,” explains Johnson.

For Johnson, the real challenge was how to have two actors play the same character without any disconnect, never mind the obvious “looks” problem. Johnson was lucky enough to have Gordon-Levitt, who avoided mimicking Willis and instead toyed with becoming a younger Willis would be.

“For me as a writer, once I get on set I’ve had the script in my head for years, I’ve seen that movie, I’m bored with that movie. I want these guys to show up and make decisions that are going to surprise me. That’s why I hire actors like Joe [Gordon-Levitt], Noah [Segan], and Emily [Blunt],” says Johnson. “They will always take it in a direction I didn’t expect.”

Gordon-Levitt, who would spend three hours in makeup, is the perfect example of a chameleon, becoming unrecognizable within an overall groundbreaking performance.

“We ended up going more subtle, using practical prosthetics to alter a couple of key features but really relying on Joe’s performance, mannerisms and what he could bring to make his character come to life as a young Bruce Willis,” adds Johnson.

Having the role written for Gordon-Levitt, both the actor and director fell into the same familiar pattern from having worked on the indie film Brick back in 2005, making Johnson’s original idea give way to a very compelling piece of filmmaking.

“The great thing about directors like Chris (Nolan) and Rian (Johnson) is that they use the sci-fi genre as a springboard to greater storytelling. They can actually see what their film looks like in their mind,” comments Gordon-Levitt.

Excited to hear audiences’ time travel interpretations and already hopes for a franchise, Johnson refrains from falling into that familiar pattern by already working on his next feature.

“I want to keep telling my own stories. That’s what I’m in it for. I’m already working on the next one. What really gets me excited is starting with a seed of an idea and growing it until the end,” he says.

The Johnson/Gordon-Levitt wonder team has led the way for bigger and better things as Gordon-Levitt prepares for his directorial debut in Don Jon’s Addiction in early 2013.

“It was something that I’ve been writing for years,” says Gordon-Levitt. “Even during Inception I would talk to Rian about it.”

Sure to make a hit at the box office, Looper is an exciting and heart-pounding ride into the future.