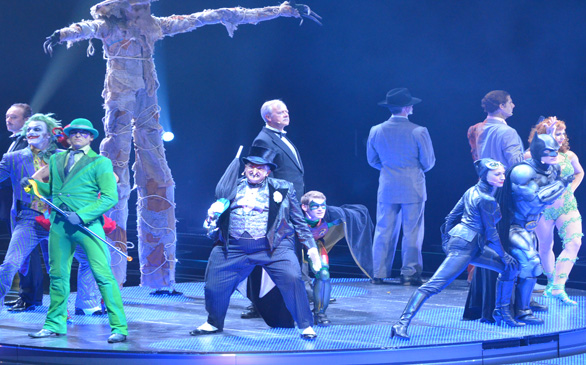 The creative collaboration among Warner Bros. Consumer Products, DC Entertainment and Water Lane Productions features a 42-member cast, led by Sam Heughan as Batman and Bruce Wayne. He’s solid while acting. In fact, everyone is.

A unique action-packed live arena piece, “Batman Live” figures to be an entertainment show for anyone, including kids, teenagers and adults.

But there’s something missing.

Although it does present some impressive stunts here and there, the special effects accompanying the set are dull. The pyrotechnics fail to add adventure to the performance. Illusions and video screen sequences are also a part of this distinctive production, but it could have more.

“Batman Live” sports a thrilling story, which begins with Wayne’s parents being murdered when he’s a young kid. We soon witness that the grown-up Wayne carries his double life as a well-hidden secret. After the death of his parents, Dick Grayson (Kamran Darabi-Ford) goes ballistic in his attempt to find The Joker (Mark Frost).

Wayne accepts Commissioner Gordon’s proposal of looking over after Grayson, since he’s now an orphan. What follows provides an electrifying thrill into Batman’s iconic image of a superhero, which is altered by the villain efforts of The Joker, Catwoman (Emma Clifford), Two Face (Christopher D. Hunt) and The Riddler (Christopher Price), among others.

The Joker manages to break into and overtake Arkham Asylum. Along with all the criminals, this goofy-evil man seeks to destroy the good of Gotham City. Of course, The Joker’s plans involve killing Batman, and this part of “Batman Live” is the most satisfying. For its wit, comedy and complete group of main characters on the stage all at once, this scene becomes rather fruitful as it progresses.

The most entertaining character of them all is Frost as The Joker. This dude is beyond legitimate; he really does remind us of what deceased actor Heath Ledger accomplished playing The Joker in the film The Dark Knight. Frost is simply amazing in his role; he delivers a performance to remember for the ages. It’s just too bad we can’t consume more of his acts on the main stage.

And Clifford adds that sensual, sexy, lustful and charismatic element into the show, which cultivated numerous laughs, cheers, applauses and joys from the audience.

Though slightly above average in terms of entertainment, "Batman Live" could add more aggressive special effects in its plot to make it unbelievably entertaining. After all, Batman is one of the most glorified superheroes of history, if not atop of the list.