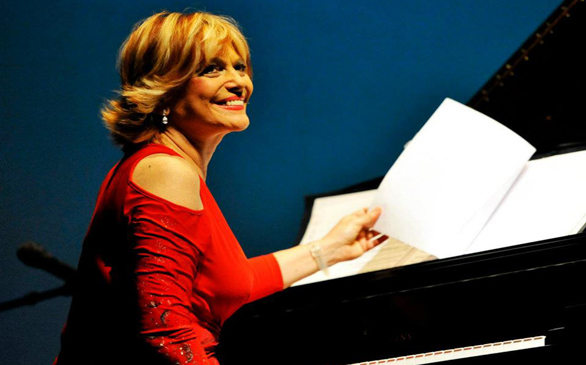 Ferman, as always, managed to captivate the crowd with her magical fingers, which have given her the talented gift of playing the piano since the age of 7. At 3 years of age, Ferman began her musical studies. By 9, she won the Jeunesses Musicales Competition.

Known for delivering lovely musical gestures on behalf of the tangos, waltzes, milongas and others, Ferman appeared on stage with a marvelous black attire that made her blonde-light orange hair look even more luminous. She looked adorable. While performing the opening tune “Creole Eyes” – an American piece by Luis M. Gottschalk – Ferman blossomed even more.

On this night yards away from Santa Monica Beach, Ferman captured her audience with not only her musical magnitude but also her ability to charm those in attendance by telling personal anecdotes. That made the event more pleasant, especially because she speaks her English with an infectious South American accent.

She continued with pieces from France, Brazil, Mexico, Uruguay and Argentina. All came at her expense and unique touch of creativity. Ferman’s delivery in Brazilian Ernesto Nazareth’s “Brejeiro,” which is a tango, proved to be a spectacle. The fans loved it.

Before closing out with the popular “La Cumparsita” by Uruguay’s Mattos Rodriguez, Ferman displayed epic music moments in Astor Piazzolla’s “Oblivion” and “Adios Nonino.” Both are Argentine pieces.

Ferman studied with Celia Bronstein in Buenos Aires, Argentina and Eugene List and William Daghlian in New York City. Her musical collaborations include duets with guitarist Eduardo Isaac and bandoneonist Daniel Binelli, among others.