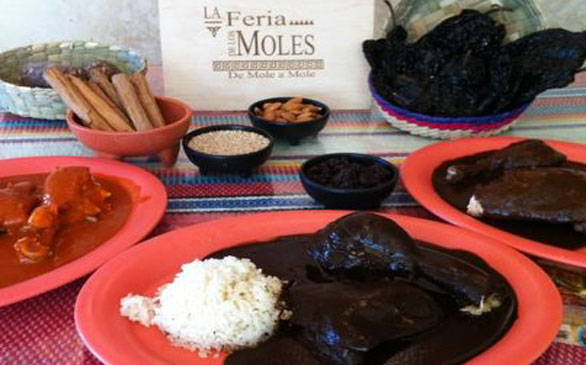 Los Angeles is home to several elements of entertainment, including some of the most delicious food festivities the world has to offer. This is where the 5th Annual La Feria de los Moles comes into play; it’s taking place Oct. 7 at La Placita Olvera on Olvera Street in Downtown L.A.

Entrance to La Feria de los Moles is free, and all the exquisite food is available for purchase. It begins at 10 a.m. and ends at 7 p.m.

"When I was a kid growing up in the town in Puebla, my grandma was very much solicited to make mole. I learned a lot from her, especially regarding the ingredients that moles have," fair founder Pedro Ramos said of his inspiration to formulate the festival.

"One day I thought about entering her to contest, but I didn't in the end. While here in Los Angeles, I decided to create a festival of moles, and I invited numerous people from Oaxaca," he said.

Ramos does admit that it took a while to convince the Oaxaca-based individuals, but it worked out just fine. And now, we have the 5th Annual fair.

The largest Mexican food festival within the U.S., La Feria de los Moles (The Fair of the Moles) features the rich flavor, folklore and culture from the states of Puebla and Oaxaca.

Ramos acknowledges that it's a very diverse event.

"Year by year, the fair keeps growing. Right now, what we've done is attempt to bring more moles and diversity," he said. "Every year, we have surprises and the folklore is very important for our festival - especially for our Oaxaca and Puebla people."

On average, around 30,000 individuals attend the all-day event, which provides an opportunity to taste more than 13 different Mexican moles ranging from sweet savory to hot spicy and even some deserts. Anyone can come.

"This festival is working because Los Angeles has received it well," Ramos added." Many people attend, and different [ethnic] communities are gaining closure to it by just coming for the experience."

The history of the moles is large, and many stories exist that include prominent myths of the past. But its meaningful plot derives from Mexico - especially in Puebla, where the most common legend appears during the colonial era at the Convent of Santa Rosa.

Ramos' contributions to the L.A. community are prominent, with La Feria de los Moles being atop.

"It's a festival for everyone, not just hispanics," Ramos said. "It's for the entire global community."