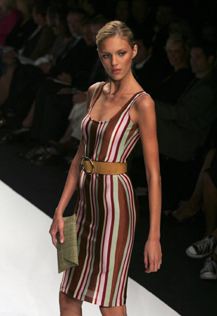 The company – whose collection is usually the province of powerful women such as Sen. Hillary Clinton and Secretary of State Condoleezza Rice – debuted its spring line that it hopes will attract a younger customer.

The year-old management team at St. John hopes the new designs will shake things up. Chief Executive Richard Cohen’s goal is to transform the company, with $400 million in annual sales, into a global luxury brand that speaks to women of all ages.

"The direction of the company is more Hollywood," Cohen said at the show.

If the fashion show helps them sell well, St. John’s next stops are New York and European runways, Cohen said.

He expects to announce a new designer in two to three weeks to replace Marie Gray. She stepped down this summer as chief designer of the company, which is now majority-owned by an investment firm.

While Jolie was a no-show at the event, smaller stars turned out for the 10-minute show. In the audience: former St. John spokesmodel Kelly Gray, the daughter of Marie and face of the company for nearly 25 years.

Another way St. John is trying to broaden its appeal is by dropping the word "Knits" from its company name, said Chiranjeev Kohli, a marketing professor at Cal State Fullerton. Knits tends to imply an older customer, he said.