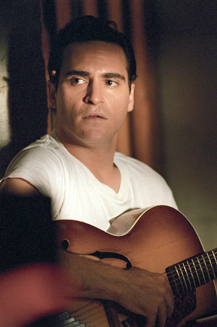 With a slew of biopics about prominent musicians dominating the Hollywood mindset, it was only so long until the "Man in Black" became the focus of a feature film. Walk the Line, which takes its name from the most famous of Johnny Cash’s songs, is a sort of behind-the-music tale about the early years of Cash’s career; it focuses upon his time on the road, and his tumultuous love affair with the love of his life, June Carter.

The film benefits greatly from the strong performances of its two leading actors. Joaquin Phoenix portrays the young Cash, from his days in the air force, on through his meteoric rise to stardom. His best friend and eventually his wife, June, is played by the always-charming Reese Witherspoon. The chemistry between them and their ability to recreate the chemistry of the legendary duo is at the heart of the film.

"I couldn’t have found John without the way that Reese found June," notes Phoenix, a notoriously dedicated actor who speaks highly of his costar’s dedication to her role. "Reese spent twice as much time working on her stuff, and had half as many songs as I did. I don’t know how she does it. Balances it all."

When the pair met on tour, they were both married, but were drawn to one another immediately. The dynamic that defines the film is the fact that though they were around each other for months at a time, they could not act upon their urges for the better part of a decade. Phoenix observes, "Their love was like a fairytale, this turbulent fairytale."

Though the film has its fair share of performance scenes, not much attention is paid to the writing process, or how Cash came up with his signature sound. Both Phoenix and Witherspoon depended greatly on their characters’ musical styles to get into their heads.

"It was really through his music that I was able to figure John out," Phoenix explains, "not just his words, but to get into the mindset of a musician." The dark featured actor took on all the burdens of a musician’s life, setting up a studio for himself during production and learning to play guitar specifically for the film.

"I had to familiarize myself with the guitar, because it was almost like a physical extension of John. It was his best friend, and I think he felt vulnerable whenever he didn’t have it in his hands," Phoenix remembers. He thinks back and comes to the fact that, "It was through his music and his performances that I really found John. But you can’t really think about that when you connect to a character. If you are doing that, your work is shit."

Phoenix instead took measures to immerse himself fully in the character’s mindset, and even entered a rehab program after the film was completed.

One of the hallmarks of Cash’s music, and the primary reason that it has reigned supreme for so long, is his ability to sing a song with such authenticity that the listener feels that the song is directed at them. The film also attempts to capture that at every level, from its script to its casting. Both Witherspoon and Phoenix were chosen by the Cashes to play them, so it is hard to fault Director James Mangold for those choices. Apparently Cash was especially a fan of Phoenix’s work as Commodus in Gladiator and singled the young actor out to play him.

Mangold also took care to cast actors to play opposite his leads that were not experienced actors, or had not acted before. There is a slew of actual country stars in the film, from Shelby Lynne (who portrays Cash’s mother) to Waylon Payne (who fills the shoes of Jerry Lee Lewis) to Tyler Hilton (who slips into the moves of Elvis Presley).

"It was really awesome to see Joaquin get into it. To walk into his apartment and just see it filled with things that were going to help him with the character," Hilton notes. "It made me feel a lot better about all the prep work I had done for Elvis"

The most gripping portion of the film takes place "on the road," where Cash and Carter attempt to keep their eyes off each other while adventuring around the back roads of America with rock legends Presley and Lewis, as well as others. Though it seems like a contrived situation, these legendary tours are but one of the many aspects of this film where fact is even stranger than fiction. This ever-present authenticity is what made Phoenix enjoy the live and tour portions of the film so much.

"This film takes place in a time before people put on polished live acts. There were no such thing as rock stars yet. There weren’t light shows or special effects. It was just a man on stage, baring his soul," Phoenix muses. "For me that honesty and intimacy is what John was about."

The fact that this film did not try to condense the incredibly complex and eventful seventy-plus years of Cash’s life into two hours excited Phoenix. He explains, "Many people only know Johnny as the ‘Man in Black’, and it was exciting for me to learn about his early years and his breakthrough at Sun Records, just as rock and roll was taking off."

The film, which is book-ended by Cash’s legendary performance at Folsom Prison, does a great job of focusing on his early years which, even though they are only a small part of the legend that is Cash, tell a story that many people do not know. A story that is just as gripping as the later trials and tribulations that he had to endure. In the end, Phoenix explains that he, like Cash, depended on his costar fully.

"We went through a lot of difficult things together, because we knew we had to take on both the good and the bad of these characters."