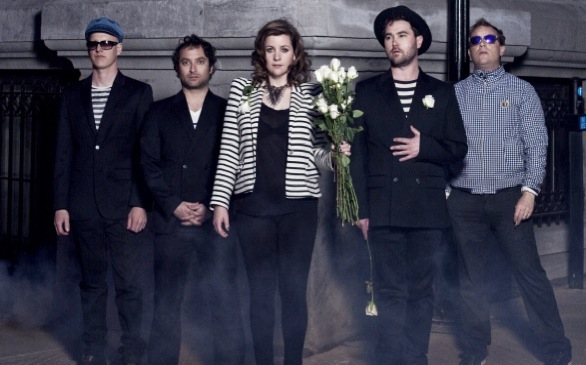 Stars has a new ablum out and is currently touring.
(Credit: youarestars.com)

Canadian indie electronic band Stars released their sixth full-length album, The North, on Sept. 4.  Now on tour, the band will make a stop in L.A. on Oct.18. Drummer Patrick McGee gives Campus Cirlce the inside scoop.

Campus Circle: You have been making music since 2001. How does it feel to just have come out with a new album?
Patrick McGee: Feels pretty good.  Can't believe we're still in the game really.

CC: Can you tell me why you chose the name, The North?
PM: Torq and I had a big fight about the title.  He came up with it and was really really, really sold on it.  I, on the other hand, thought it sounded provincial and pretentious, which was not how I felt about the record.  Everyone in the band liked the title except me actually.   Anyways, after days of bull-headed rutting. he ultimately won me over.  I can't remember the endless litany of arguments Torq enlisted to defend The North, but in the end this is what I understood:  The North evokes a sense of vast mysterious beauty, a new, mostly unknown modern frontier.  The idea of the north holds a lot of mythical significance for us Canadians as well, and there is a battle shaping up between those who want to preserve this myth and it's power and those who just see the north as a huge resource fueled economic smorgasbord.  It is also where we are from.  And hey, what's wrong with being provincial and pretentious?  Worked for oasis.

CC: Which song will you be making a video for first?
PM: "Backlines," I believe.

CC: How would you describe the sound compared to the other albums?
PM: Richer and more live sounding.

CC: Where do you get your lyric inspiration? Who writes the songs?
PM: We all write the songs.  Chris, Evan and I write the music, Torq and Amy the lyrics, and then we all arrange the whole affair until it sounds like a song.

CC: What is your favorite city to perform in?
PM: I try not to pick favorites, but I always have a good time in Dallas.  I've come to really like Texas.

CC: Who would you say has been your favorite band to tour with?
PM: I loved touring with Magnet and think about life and apostle of hustle.  Death Cab for Cutie was also quite memorable.  All very lovely people.

CC: What is the last show you went to?
PM: Refused at Metropolis.

CC: Not by you?
PM: Today my favorite song not by Stars is "Wide Awake" by Katy Perry.

CC: Any embarrassing moments from being on the road?
PM: I once dropped the fly ball hit by Ben Gibbard in the bottom of the ninth that would have won us the game, but instead handed the game to Death Cab; still feeling the shame.

CC:  Now for some fun ones, would you rather be a kid or an adult forever?
PM: Adult.  You can't do anything when you're a kid.

CC: Would you rather eat a live cockroach or bite the toenail off of someone’s dirty foot?
PM: What a weird question.  Can we change it to "Who would you rather make out with - Katy Perry or Rihanna?"

CC: Would you rather perform a live show naked or have the whole crowd be naked?
PM: Crowd naked for sure.  Then I'd get naked and go crowd surfing.  Skinny-dip the crowd.

Stars will be performing at the Mayan in Los Angeles on Oct. 18.