Least Among Saints Shows the Aftermath of War on Veterans 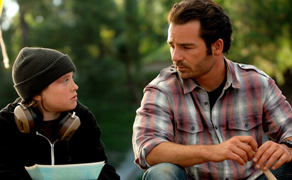 American media have portrayed war in a glorified light with movies such as Saving Private Ryan, We Were Soldiers and Black Hawk Down. However, once the killing is done and the American people welcome back its heroes, what happens when the soldiers return back to their normal lives? Least Among Saints gives viewers the real story of what many veterans suffer when returning home after war: hopelessness.

Martin Papazian wrote, directed and stars in Least Among Saints. He initially came up with the idea when he met with war veterans while acting in movies, such as Jarhead, and his own experience post 9/11.

Because American war movies are so commonly filled with scenes of blood, guts and killing, Papazian’s Least Among Saints is unique in that it truly shows the effects of war rather than just the merciless violence that takes place.

Least Among Saints tells the story of war veteran Anthony Hayward (Papazian).  After experiencing death and killing, Anthony returns home to a broken marriage and develops feelings of darkness and hopelessness that drive him to edge, including almost committing suicide.

When he meets 10-year-old Wade (Tristan Lake Leabu) who desperately needs help after his mother dies from a drug overdose, Anthony takes care of him and embarks on a journey to help find the boy’s long-lost father.

“As I was writing, I started thinking about this kid I knew…” said Papazian.

When Papazian was younger, he befriended a childhood neighbor whose mother was also a drug addict and lived on the edge. Curious to see what would happen if he added this young boy to the story, Papazian created Wade. The two main characters in the film worked harmoniously together as they help each other find hope in a hopeless situation.

“Working with him was tremendous,” said Papazian about working with his father. “It was really about family and creating something that we can be proud of.”

However, Papazian admits that working with his father on his film was not always smooth sailing.

“It wasn’t without budding heads,” laughed Papazian. “But that’s all a part of making a film.”

Papazian hopes that Least Among Saints will not only connect with war veterans, but also with the general audience.

“There is a universal reach with the film; we all have regrets and dark moments,” said Papazian. “The central message is: You gain personal freedom through acts of compassion and by being of service. Through that, you’re able to find healing.”

Q & A with Writer/Director Martin Papazian & special guest, Milo at the AMC Loews Broadway 4 in Santa Monica on Friday @ 7:45 PM

Q & A with The Soldier’s Project & Veterans for Peace at Laemmle's Playhouse 7 in Pasadena on Friday @ 7:10 PM