"Just Seen It" is on the Air 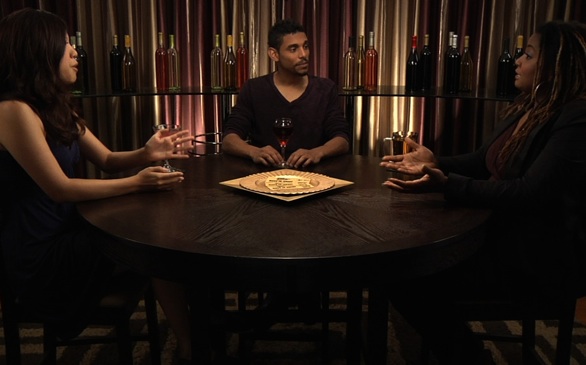 From left to right: Teresa Lo, Salim Lemelle and Leah Aldridge are reviewers on "Just Seen It."
(Credit: Courtesy of Hermosa Entertainment)

“I was sitting in Café 84 [at USC], and three guys had just seen a movie and were arguing vehemently around the table.”

David Freedman, the “Just Seen It” show runner, said this is what sparked the idea to create a review show about two years ago.

“I looked at the landscape,” said Freedman. “And I saw what was on the Internet, and it was just awful. There wasn’t any place that I could go to find the kind of reviews that I had grown up with, like ‘Siskel & Ebert.’”

Realizing that there was space for a movie and TV review show in the market, Freedman developed “Just Seen It.” Now, the show runs on PBS OC and airs every Saturday at 6 p.m.

USC film graduate and undergraduate students produce “Just Seen It,” which consists of a total of nine student reviewers. On the show, the reviewers rate each movie and TV show on a three-part scale: See It, Stream It or Skip It.

“We’ve done about 350 review shows,” said Freedman, who has a Master’s in TV production at USC. “We produce review segments that, put together, make up a half hour show.”

What makes “Just Seen It” a unique review show is the fact that there isn’t anything quite like it in the media.

“Since ‘Siskel & Ebert’, there’s not really anything on TV,” said Salim Lemelle, a reviewer on the show who received his Master’s in screenwriting at USC. “There are a slew of shows on the Internet/web series that review a movie, but it’s not the way that we’re doing it. We’re very structured.”

Because the cast and crew were all film students at USC and other colleges, they know their stuff. They have been educated in film and know what each film and television show needs to make for a good product. Thus, they are able to tell viewers why or why not they would like the show or film.

Freedman added, “We really try to break down the movie or TV show so that you have a good understanding after watching us. The majority of reviewers on the Web are just people yelling at you, trying to be entertaining.”

Although the show has found its niche in the movie/TV show review world and gained success, the journey to PBS OC was not an easy one.

“That was definitely difficult,” said Lemelle. “We were trying [to get on TV] for a very long time, knocking on a lot of doors and finally being able to get onto PBS.”

In the beginning, “Just Seen It” was missing important elements to make the show stronger, such as entertainment and more information about the movies and shows being reviewed.

“I shouldn’t have started shopping the show until this year,” said Freedman. “It took a whole year for us to get our show right.  That’s like 200 episodes until we got it right. We got a lot of rejection and deservedly so.”

But now the show is much better and is getting more and more viewers. When “Just Seen It” first aired, they were below their standard. Now, their viewership has at least doubled and continues to grow.

“We’re much more professional, knowledgeable, informative and entertaining,” said Freedman. “When you watch [“Just Seen It”], it doesn’t’ matter whether we like the movie or not; you’re going to know whether you like it or not.”

Although “Just Seen It” is more structured and has improved drastically since its inception, the show is still having trouble finding funding because it is a new show.

However, Lemelle and Freedman said this might change as the show becomes more popular and with the support of PBS and maybe even USC.

“We would love it if USC sponsored our show,” said Freedman.

“It’s exciting because PBS believes in us enough to give us a shot,” added Lemelle. “Now, our next step is getting to PBS national.”

Until more advertising, funding or a sponsorship comes through, “Just Seen It” is running a Kickstarter campaign. According to Freedman, the cast and crew is running the campaign to raise funds to keep the show going while they wait to hear about being picked up by national PBS.

Until that day happens, “Just Seen It” will continue to be on the air. They have ordered five more episodes and will be on PBS OC through the end of November.

For more information on the "Just Seen It" Kickstarter campaign, click here.