Less is More for Lakers 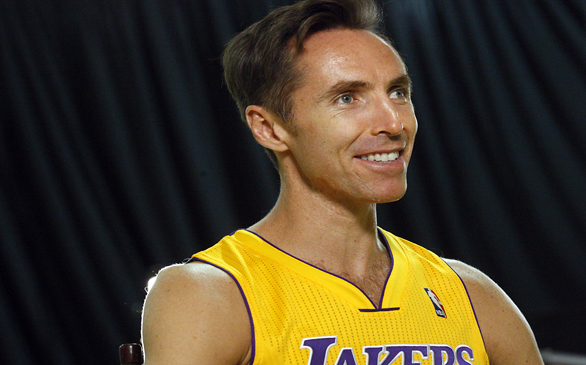 Who sacrifices the most?

Whose stats decrease, if not take a flat-out beating, on a Los Angeles Lakers team with so many pieces on offense?

It's all in the better interest of winning, sure, and a championship ring, not a scoring title, is the goal.

But it's worth asking. Maybe the fantasy basketball wonks will appreciate it.

"In Phoenix, the reality of it is Steve (Nash) had the ball in his hands (and) eventually, whether there was one second on the shot clock or 10, he was going to find somebody," Lakers coach Mike Brown said. "He doesn't need to do that here all the time."

Nash averaged 12.5 points and 10.7 assists last season with Phoenix. He had five points and three assists in the Lakers' deceptively lopsided 110-83 loss to Golden State in an exhibition opener Sunday.

The Lakers led at halftime, 56-49, and none of their starters played in the second half despite persistent "Ko-be, Ko-be" chants as the Warriors went on a 35-0 run. There were even some boos.

It was slightly different from the ever-present cheers in the first half.

On one play, Nash turned around Jarrett Jack with a jab-step, sending the Warriors guard spinning awkwardly while Nash stepped back for a three-pointer. On another play, Nash quickly swung a pass to Kobe Bryant, who fired it down low to Pau Gasol for an easy basket.

Bryant averaged 27.9 points last season. It's sure to come down. On the other hand, he won't have to work as hard for his shots.

"What will happen is over the course of time, he's going to see with the four (other starting) guys out there ... he's going to get some easy looks," Brown said. "I think he'll realize that he doesn't have to always do as much because other guys will be able to do things at different times."

Bryant wasn't accurate Sunday, making two of seven shots, though he didn't seem bothered by a sore right foot that kept him out of practice Friday. Of his 10 points, two came on a hang-in-the-air drive. He made all six of his free throws.

Antawn Jamison will definitely see his numbers dip after averaging 17.2 points last season as a starter for Cleveland. The Lakers' sixth man had three points Sunday.

Gasol's scoring can't fall much more than it did last season. He averaged a career-low 17.4 points and couldn't find space in the lane with Andrew Bynum there so often. Count on him for a bounce-back season.

Who knows about Metta World Peace's offensive production? Who really knows about him, period? Your guess is as good as anyone's. He averaged a career-low 7.7 points last season and scored 10 Sunday.

As for Dwight Howard? Tough to tell. He did not play against Golden State, part of the plan to ease him into action after back surgery in April to repair a herniated disk.

It's unclear whether he will play Wednesday against Portland in Ontario, Calif., though fans went nuts when he was shown on the scoreboard in the second quarter Sunday.

Does it really matter who scores what?

"All these guys are good guys and I truly believe they all want to win a championship," Brown said. "If they do, they'll figure out ways to sacrifice a little bit but not giving up their aggressive styles."