Sparks Swept Out of West Finals by Lynx 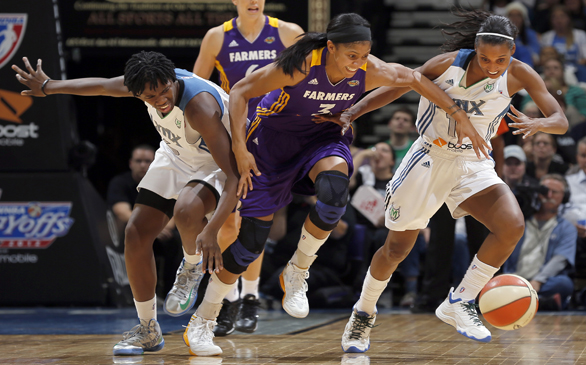 Of course, the ball wasn't in Candace Parker's very capable hands all afternoon.

It only seemed that way.

Yet when it needed to be there most - it wasn't.

The Sparks, trailing by a point against the Minnesota Lynx, came out of their final timeout with six seconds remaining. Parker did not get the opportunity to get involved as Los Angeles Sparks guard Alana Beard's 16-foot jumper went off the rim.

Game over. Season over. And an emotional Parker pulled her jersey up over her eyes.

Minnesota's 80-79 victory Sunday afternoon at Staples Center completed a two-game sweep of the Western Conference finals and put the Lynx in the WNBA finals, again. They beat Atlanta last year for their first league title.

"We were looking for either a drive and Candace was going to follow it to the rim and get a put-back, or Beard had the option to get it to Parker on the pick and roll," Ross said. "And it just ... either it wasn't a good play, or two, it wasn't executed very well."

Parker was having one of those phenomenal afternoons - she finished with 33 points and 15 rebounds, and hit a big three-pointer off the glass to give the Sparks a 79-77 lead with 1 minute 31 seconds left.

But a wide-open Monica Wright responded with a three-pointer to give the Lynx the lead for good.

The Sparks had appeared to seize control with a 17-0 run in the third quarter but Minnesota chipped away behind a spate of three-pointers by Maya Moore.

Seimone Augustus led the Lynx with 21 points and Moore had 20, including four three-pointers.

The Lynx were quick to jump on the Sparks' mistakes.

"You can get away with doing that same thing many nights," Ross said. "But you can't get away with it on Maya Moore, or Minnesota. She really stepped up and hit two big threes when we were a little slow on our rotations and our switch. And we had a miscue with Wright in the corner."

Parker was tearful on the court but composed by the time she arrived in the interview room.

The Sparks' loss at Minnesota in Game 1 set the tone.

"We got punked the first game," Parker said. "We did. That's all there is to it. They came out and hit us in the chin and we didn't respond. This game, we showed a little bit of fight and we were right there.

"So maybe in the first game if we had played a little bit harder, a little bit better, they might not have had as much for this game."