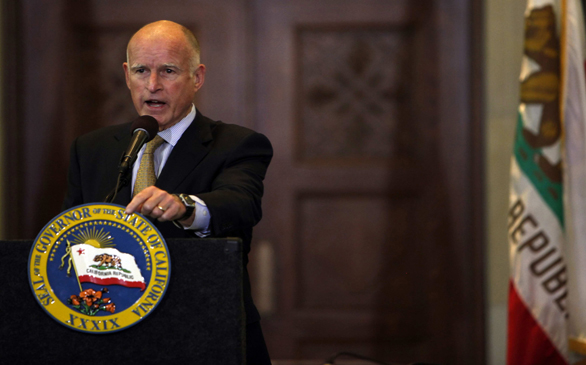 He directed the California Air Resources Board to increase the fuel supply by allowing the immediate sale and import of cheaper and more available winter-blend gasoline.

The move would reduce the price of gas in California by 15 to 20 cents per gallon, probably within a few days, said energy expert Chris Faulkner of Dallas-based Breitling Oil and Gas.

"This would immediately increase the supply of gasoline in California," Faulkner said, but he cautioned that it would take a few days for the governor's move to be reflected at the pump.

"Gas goes up quickly and comes down slowly," Faulkner said.

Winter-blend gasoline is a mixture that evaporates more quickly than gas sold in summer months. It's considered more detrimental to air quality during warm weather.

"Gas prices in California have risen to their highest levels ever, with unacceptable cost impacts on consumers and small businesses," Brown said in a statement.

"I am directing the Air Resources Board to immediately take whatever steps are necessary to allow an early transition to winter-blend gasoline."

On Sunday, gas prices hit a record average of $4.655 for a gallon of regular in California. The national average is at $3.814.

Analysts have attributed the sudden surge of gasoline prices in California to refinery and pipeline problems. They have severely impacted supply in a state that already pays a premium for cleaner-burning fuel.

"This is the worst it's ever been for sure," said Marie Montgomery, spokeswoman for the Automobile Club of Southern California. "This is pretty unprecedented. It's terrible."

Chief among the immediate problems was a Monday power failure at Exxon Mobil Corp.'s refinery in Torrance. The refinery went back on line Friday, the company said.

Other forces have been affecting the price of gas in California. A Chevron Corp. refinery in Richmond has been running at reduced capacity because of an Aug. 6 fire, and a pipeline that transports oil from Kern County to the San Francisco Bay Area was closed because of contamination.