John Cusack as Edgar Allen Poe, King of the Underworld resurfaces and E.T. on Blu-ray 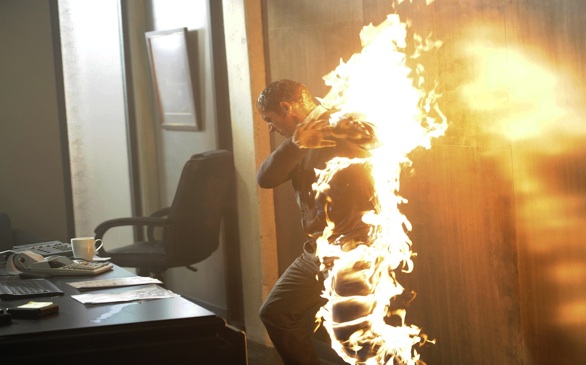 Season one of “American Horror Story” is available on DVD.
(Credit: Michael Becker/FX)

The Majors: John Cusack is Edgar Allen Poe in The Raven, a stylish period thriller that plops the master of the macabre down in the middle of the hunt for a serial killer inspired by Poe’s writing.

The Idiotbox: After his affair threatens to tear his family apart, a psychiatrist relocates his family only to discover their new home has a violent and disturbing history in “American Horror Story:” Season 1.

“SNL’s” Fred Armisen and musician Carrie Brownstein skewer the uber-granola bizarro world of the Pacific Northwest in “Portlandia:” Season 2. The duo play a slew of oddball citizens alongside some amazing guest stars like Kristen Wiig, Jeff Goldblum and Kyle MacLachlan as the mayor.

Just in time for Halloween, “Adventure Time:” Jake vs. Me-Mow! A dementedly hilarious cartoon, “Adventure Time” follows the misadventures of the last human boy and his shape-shifting dog across an acid trip fantasy landscape.

Two new releases are sure to answer any craving for steamy romances and backstabbing drama. “Gossip Girl:” Season 5 finds Serena enjoying life as an Angelino with Chuck and Nate. Meanwhile, Blair is back on the Upper East Side dealing with the Prince Louis/Chuck fallout. “90210:” Season 4 has the friends from Beverly Hills navigating love and finding jobs post-high school.

Stranger Than Fiction: Journey into the twisted mind of Bill Plympton in Adventures in Plymptoons. The Oscar-winning cult figure still painstakingly hand draws his films frame by frame.

Experience the history of America’s pastime with the monumental four-disc set The World Series: History of the Fall Classic. Bob Costas narrates the four-hour documentary, which stretches back to the first World Series in 1903.

From the Vault: Two under-seen gems from cinema’s greatest tough guys are now available via the Warner Archives. King of the Underworld features Humphrey Bogart in his first starring role as an injured mob kingpin who seeks help from a desperate doctor. Howard Hawks directs James Cagney in the racecar drama, The Crowd Roars.

Stephen King’s creepy Pet Sematary centers on a family whose new home is located next to a cemetery with the power to bring back the dead. When tragedy strikes, its lure is too much to ignore.

Settle in for two tales of murder from the master of suspense, Alfred Hitchcok. Made at the height of the original 3D craze, Dial M for Murder is once again available in its original 3D form and newly restored. One of Hitchcock’s best, Strangers on a Train stars Robert Walker as a psychopath who strikes a deal to trade murders with an unhappily married man.

A hilarious black comedy musical with a star-studded cast, Little Shop of Horrors stars Rick Moranis as a milquetoast with a tyrannical man-eating plant.