An Italian Music Showcase, The Stripminers Live and a Las Vegas Contest 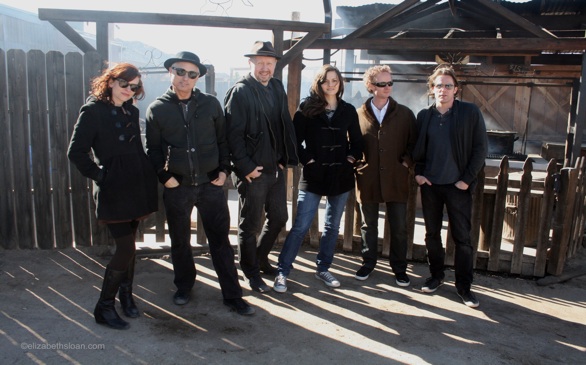 The Stripminers will be at the Echo Country Outpost on Oct. 27.
(Credit: Elizabeth Sloan)

THE STRIPMINERS: FRAIL HOPE RANCH
The six members of Los Angeles-based alt-punk band the Stripminers all have impressive resumes; DJ Bonebrake from X, Brett Anderson of the Donnas and Paul Stinson of the Radishes are among the group’s luminaries. Frail Hope Ranch, set to drop Nov. 13, finds the band veering into alt-country territory with a set of songs revolving around a male/female duo. The Stripminers play a pre-record release party at the Echo Country Outpost on Oct. 27, and they’ll have white vinyl copies of Frail Hope Ranch at the show.

FREE E.P. FROM PALENKE SOULTRIBE
Score a free copy of Palenke Soultribe’s five-song E.P. Makako. Juan Diego Borda and Andres “Popa” Erazo are Palenke Soultribe; the men were both born in Colombia but now live in Los Angeles, and their music is a mash-up of yesterday’s funky Afro-Colombian beats and today’s EDM. Grab your copy at www.palenkesoultribe.bandcamp.com

ITALIAN MUSICIANS ARRIVE FOR HIT WEEK
It’s once again time for Hit Week, the annual event featuring the hottest new Italian artists. Hit Week in Los Angeles is Oct. 13-17 and will take place at various venues, including the El Rey Theatre and the Taste of Italy event downtown and present everything from DJ sets to full-on rock shows. Acts scheduled to appear include Mannarino, Negrita, Subsonica, Mama Marjas and Puglia Sounds. For more info, visit www.hitweek.it

AG COVERS THE BEATLES
Since she uses initials for her stage name, you might think that AG is mysterious. Well, she is, but she certainly hasn’t been lurking in the shadows. AG has a fan base that’s developed over the course of eight albums and through her touring with the Rescues, an outfit that includes established singer/songwriters Kyler England, Rob Giles and Gabriel Mann. Now she’s hanging out, so to speak, with the really big boys. Her new E.P., The Beatles, features covers of six Fab Four songs including “She Loves You,” “I Saw Her Standing There” and “From Me to You.”

SIXX SENSE LAS VEGAS CONTEST
Mötley Crue’s Nikki Sixx and Best Buy have teamed up to offer a lucky contest winner an expenses-paid trip to Las Vegas. The contest is to promote Sixx’s Sixx Sense Rock radio show and Best Buy, where fans can purchase the music heard on Sixx’s show. The grand prize is a round trip for two to Las Vegas and two nights lodging at the Hard Rock Café Hotel & Casino. A second prizewinner will receive an autographed As I Lay Dying Ibanez guitar. Enter the Sixx Sense Las Vegas Hard Rock Hotel & Casino giveaway by Nov. 5 at www.sixxsense.com/bestbuy

HALF NOTES
Former tennis champion Yannick Noah releases his 11th album this week; it’s a tribute to Bob Marley called Hommage. Los Angeles D-beat deviants D.I.S. (Destroyed in Seconds) have a new one coming from Deep Six Records; look for Becoming Wrath to drop on Nov. 1. The World Record will release Freeway Special this week; the album contains tracks and if you purchase the vinyl edition, you’ll get an additional five cuts. Keyboardist Salvador Santana will be playing selections from his album Keyboard City when he appears at the Whiskey on Oct. 17.