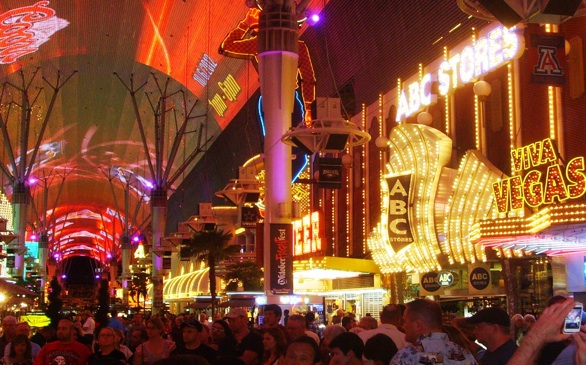 When a road trip to Las Vegas beckons, the mind begins to reel with all the fun that’s waiting. Where else can you dance all night in the hippest clubs after an afternoon of playing the slots and an evening of seeking out the city’s best shrimp cocktail? Booze flows freely, showgirls offer photo-ops and Elvis is always around somewhere. With all of these enticements bouncing around in your brain you can be forgiven for forgetting to bring your skis with you. Just an hour outside of town you’ll find another reason to love Las Vegas: the Las Vegas Ski & Snowboard Resort.

Because Las Vegas is situated in the Mohave Desert, it is not ordinarily associated with skiing. Yet the Las Vegas Ski & Snowboard Resort (LVSSR) is hardly a secret. In fact, LVSSR is a sister resort to the better-known Park City Mountain Resort in Utah and California’s very own Soda Springs at Donner Summit and this season marks the resort’s 50th anniversary.

Surrounded by bristlecone pines and aspen trees, the base lodge sits at about 8,500 feet and the chair lifts drop skiers and snowboarders off about 800 feet higher where there are 24 trails to choose from. Snowboarders can try out a terrain park outfitted with tabletop jumps and rails while anyone who feels like just being a snow bunny can hang out, eat and drink at the newly remodeled Bighorn Grill. Best of all, you don’t have to drive from Las Vegas to the resort on your own if you don’t want to; $20 buys a roundtrip shuttle ticket. LVSSR generally opens the day after Thanksgiving and through the month of October they’re offering early bird discounts on lift tickets. www.skilasvegas.com

The options for lodging in Las Vegas are seemingly unlimited and choosing a place to bunk down can be a little daunting. The hippest place to hang out these days is not on The Strip, but in the downtown area. The downtown area is where Las Vegas as a gambling and entertainment mecca began, the place where fabled Rat Pack members like Frank Sinatra, Dean Martin and Sammy Davis, Jr. hung out at hotel casinos like the Golden Nugget, an establishment still “dealing out” the thrills and chills today.

The entire area has undergone a renaissance, and one of the main attractions is the Fremont Street Experience, a five block-long pedestrian walkway that is probably one of the most fun places in the world to people watch. The entire walkway is under an arched canopy where at night an ever-changing light show and Viva Vision video presentation has visitors looking skyward as they listen to music that’s synchronized with the visuals. Three stages are scattered throughout the Fremont Street Experience; two feature live music and the other a female DJ playing a mixture of house music and oldie favorites. On either side of the walkway are entryways to casinos, bars, souvenir shops and lots of other fun places; the whole scene is really the kind of circus that only Las Vegas can provide. Entry to the Fremont Street Experience is free, but some attractions (like zip lining) cost money.

Other popular attractions in the downtown area include the Mob Museum where there are four full floors displaying memorabilia from back when mobsters ran Las Vegas. One of the fun things you can do there is “shoot” a machine gun (it’s simulated.)

At the Plaza Hotel & Casino, adjacent to the Fremont Street Experience, you can hear stories about the mob days told by one of the joint’s “broads” or maybe even by namesake Oscar Goodman himself, a former attorney for mobsters.

The Gold and Silver Pawn Shop is also in the downtown area if you’d like to see where the History Channel’s “Pawn Stars” is filmed and maybe pick up a Chumlee T-shirt while you’re at it.

Unlike much of Las Vegas the downtown area is easily navigable on foot and showing up spontaneously will work just fine. But if you want to do a little advance planning check, out www.visitlasvegas.com