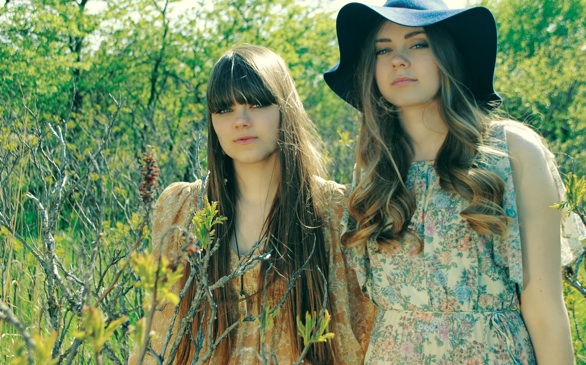 Although First Aid Kit was recently stateside earlier this year, the Swedish sisters have come back for another round of soothing sounds to our ears. Delivering a huge helping of music to plaster on our souls the girls are very excited for their next run and can only hope their tour is as well received this round, as it was the last time they came through.

The tour, already in full swing, began at the end of last month starting in Ann Arbor, Mich. at The Blind Pig and has already graced its way through Canada, New York and Boston. As the girls take on the Bible Belt and make their way out west, we can only hope their sound will be all warmed up and ready when they hit the Troubadour stage in West Hollywood on Oct. 16.

Since the last time Klara and Johanna graced us with their presence promoting their first record in 2010, the two Swedish sisters have experienced growth as musicians as well as people. This is demonstrated during their live performance for their latest record, The Lion’s Roar. Produced by Mike Mogis (Bright Eyes, Jenny Lewis, Monsters of Folk) the girls have developed their sound and taken the old-soul harmonies and romancing folk tales they’re so good at to the next level.

“Mike found these sounds with a ‘60s/’70s vibe to finish the songs, which brought lots of layers and made them very rich,” said Johanna.  “He’d work from 5 p.m. to 1 a.m. and turn one of our songs into something beautiful!”

In their live set-up, the girls perform with an accompaniment of additional musicians to give extra body to their songs and balance out the vibe. But even with just Johanna and Klara as a duet, they’re a hauntingly beautiful duo to watch with their harmonies and lyrics. Johanna and Klara, although quite young for their musicianship level, always attract a wide variety of ages?on tour.

“We’ll have a lot of 13 to 15 year olds mixed in with an older crowd,” said Johanna. “It’s always a good mix of people who come to our shows, and it’s always a huge compliment from our fans being compared to Simon and Garfunkel or the Mamas and the Papas. That’s what we’re trying to go for with our sound!”

Adding extra talent to the roster only sweetens their live sound and with the careful direction from Mogis for their songs, the girls are set out to have a great performance at every venue they hit this month.

During their shows, their music is a lovely entanglement of blues/ folk/country and tear-jerking melodies. Balanced to perfection, the songs range from haunting melodic numbers such as “Emmylou,” “The Lion’s Roar” and “To a Poet” to upbeat sing-song tunes like “Blue” and “I Found a Way” to keep the ball rolling and spontaneity in tact to make it a good blend live.

First Aid Kit will be performing at the Troubadour on Oct. 16.