Casa 0101 Brown & Out Festival: A Voice for the LGBTQ Community 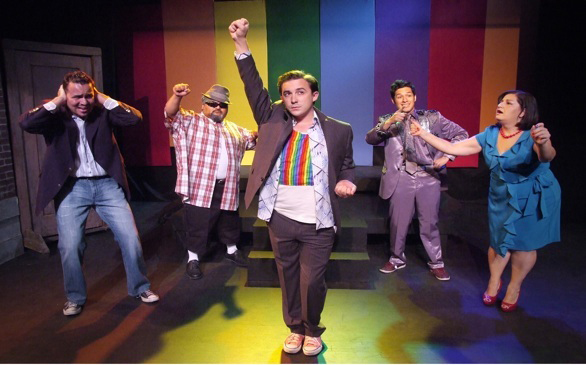 Last Friday evening, Miguel Garcia was up since 7 a.m. A typical Angeleno, he made the dreaded end of day commute from his job in Montclair as an economic development coordinator, grant writer and assistant to the deputy city manager -- except he really isn’t typical at all. He puts on the hat of playwright and producer of Brown and Out Theater Festival, a celebration of, as its name suggests, the proud Latino LGBTQ community. The program includes 10 short plays: some hilarious, others tearjerkers, all compelling takes on the taboo issue.

Impressively, Garcia was all smiles after a full day of work. He spoke at lightning speed not because of nerves, but because the 27-year old had a lot to say, all with a lifetime’s worth of brimming enthusiasm.

“My dad was from Juarez, Chihuahua and my mom was from Colima [Mexico]. They met there and then immigrated to the U.S. in the ‘70s,” Garcia said as the art-filled lobby of Casa 0101 filled with chattering guests.

His family settled in El Monte, a nearby city in the San Gabriel Valley where this year, the unemployment rate is 6 percent higher than the national average.

“I knew from the time that I was 10 years old that I wanted to be a writer. I read Catcher in the Rye at an early age and I really wanted to be J.D. Salinger someday,” said Garcia. “Everyone around me was Latino or of Asian descent. For me, it was really important, especially as [an aspiring] writer to see what’s out there.”

With the help of the Harvey Mudd College Upward Bound Program, Garcia’s curiosity led him to a summer residency at Georgetown University before his senior year in high school. There, he explored Washington D.C. as he gained the confidence to attend the prestigious institution.

“They gave me the courage to be, ‘Okay, I can do this.’ I could see myself there,” said Garcia. “D.C. really expanded my lens and view of all these cultures, languages and socioeconomic levels.”

“I came back here having to face the real world but I didn’t want to give up on my dream,” he said. “I had my job at a corporate immigration law firm at the time I was taking a writing class here with Josefina.”

Josefina López, the playwright behind the coming-of-age hit Real Women Have Curves and founder of Casa 0101, produced Garcia’s first play in Los Angeles’s Little Casa in 2009. This began a mentor-student relationship that led to the first Brown and Out Theater Festival last year.

“She motivated me to expand my little gay play in this little gay cholo bar,” Garcia laughed. “I’m gay, and I’m Latino. I love the culture, the food and the family... But a lot of times that comes with traditional thinking. My parents only speak Spanish. There’s not even an easy translation of gay. You just kind of say ‘ge-ay.’”

10 minutes before show time, Garcia could no longer restrain his anticipation.

“In the realm of theatre, film and TV, the more stories we see and hear the less it’s going to be like, ‘Shh…We can’t talk about it,’” said Garcia. “We need to be open; people can’t stay silent.”

It became clear that silence has no place here.