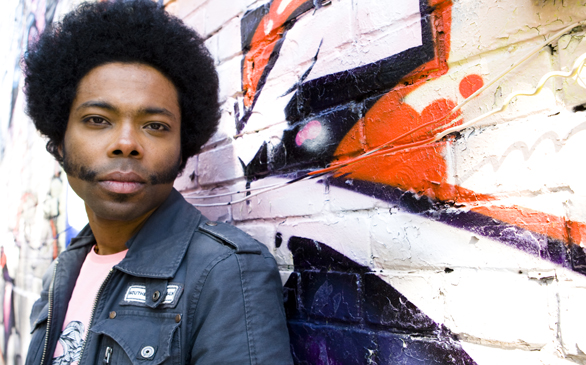 Alex Cuba is a Cuban singer-songwriter who resides in Canada.
(Credit: Courtesy of Digital Girl Inc.)

Alex Cuba is an independent artist who focuses on formulating multiple styles, not just one. He doesn’t make music for one demographic. His lyrics and sounds are targeted to and for many, if not the entire world population.

Over the years, Cuba’s repertoire has been significantly influenced by pop, jazz, soul, rock and Latin and African rhythms. But the manner in which he approaches projects and sports his pleasant, energetic demeanor has made him quite the charming dude.

Born one hour west of Havana in Artemisa, Cuba married Canadian Sarah Goodacre while in Cuba and then relocated to Victoria, British Columbia during the late 1990s. Goodacre is his manager, so they spend a lot of time together. And it’s been a blessing for both.

Since he can recall, Cuba has accepted his role in the music business.

“I don’t even remember if I made the decision to be a musician or not,” he recollected while sharing. “I just rolled with that since the beginning of my life.”

Cuba, who has been influenced by traditional Cuban music and several American artists, also noted that he deeply enjoyed playing guitar and bass as a kid growing up in his native land.

A figure who loves vintage clothes, which he consistently wears, Cuba won the 2010 Latin Grammy Award for Best New Artist and was also nominated in 2011 for the category of Best Latin Pop Album. He acknowledges his content for the honor while self-reflecting he’s doing something right.

“I could tell you the first thing I did was jump out of my mind,” he said while reminiscing about winning the Latin Grammy in 2010. “It was just an incredible moment. I felt so powerful that I was on the right track. I felt like I must have been doing something right.”

“It gives you different feelings when you listen to it,” he said.

He added, “I’ve done all my albums with really no concept in mind.”

Cuba said he wrote tunes with no plan or strategy. He also mentioned that he receives inspiration from everywhere when writing songs, doing so while being open-minded.

The album has 14 tracks, and it features a great deal of Latin funk and a collaboration with pop singer Nelly Furtado.

A tune filled with a set of guitars and bass, “Ruido En El Sistema” could very well be the album’s prize. Even Cuba knew it was special; he named the album after the track, which talks about the noise that people perceive and the distraction it ignites. Interestingly enough, “Ruido En El Sistema” also has a universal message, as it relates to many world topics, such as nations and religions.

Then there’s “Nadie Como Tu” (No One Like You) with Furtado, who adds a powerful tone with her renowned vocals.

“I think that song comes from whatever was left when I collaborated with her in the past,” said Cuba. "When I wrote this song, I couldn’t stop thinking about [Furtado]. I couldn’t stop hearing her voice.”

He went on to compose a demo so she could listen to it. When he called her, Cuba told Furtado she should be on this song.

“Yup. Sounds like I should be there,” she reportedly replied.

For Cuba, however, it was essential to maintain his musical beliefs while adding Furtado. According to him, he didn’t want the song to be an indication that he’d be formulating a mainstream piece.

“Sin Un Porque” (Without A Why) solidifies Cuba’s tropical influences based on the instruments utilized, including trumpets, conga and percussion. Detailing the current weak economy, many people can relate to the lyrics in “Sin Un Porque."

Cuba pointed out that he’s proud of this particular up-tempo, yet melancholic intriguing set of lyrics in “Sin Un Porque.”

“This is my favorite,” Cuba admitted as he laughed.  “It’s a song talking about the bad economy. It’s also one of the most spiritual songs on the album.” Additionally, the track further ponders doubt and certainty, and how each is viewed and processed.

Cuba doesn’t just make one music style. He makes many, as his quest continues within the industry. He could be argued as one the most prolific Latin musician and singer-songwriters.

“All I can say is that I have given music my heart,” said Cuba.