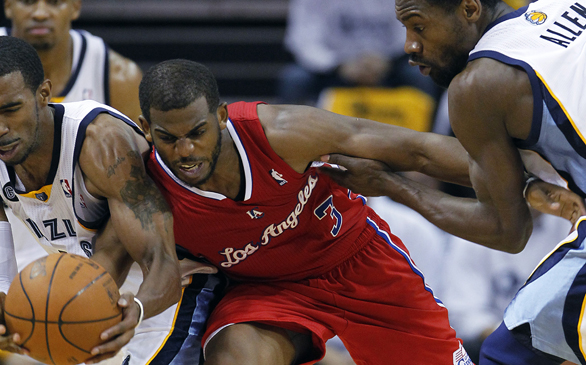 Chris Paul, center, is expected to be one of the leaders for the L.A. Clippers.
(Credit: Robert Gauthier/Los Angeles Times/MCT)

This upcoming NBA season has fans anxious to see if teams can be as good as they sound on paper. But after the Miami Heat's "Big Three" took all the attention last season, this year all eyes are on Los Angeles. Although the Lakers arguably had one the best summers, acquiring Dwight Howard and Steve Nash among others, the Clippers also picked up key players that will add to their success.

The Clippers are coming off of a strong season where Chris Paul and Blake Griffin led their team to their first playoff berth since 2006. Despite being knocked out by the San Antonio Spurs in the second round, the Clippers showed they have the talent in place to make a run again.

They may not have ended the season like they wanted too, but the Clippers accomplished a lot. They revitalized the L.A. rivalry with the Lakers, and they fought to stay in the playoffs, including pulling out a clutch win on the road to beat the Memphis Grizzlies in game seven.

Determined to make another playoff run, the Clippers acquired key role players: Lamar Odom, Matt Barnes, Grant Hill and Jamal Crawford. With these new acquisitions, there are some pros and cons.

Odom and Hill are good additions to the Clippers, as they can play both defense and provide versatility. Hill has developed into a decent three-point shooter that will allow the Clippers to have an outside threat when there is traffic in 'Lob City.' As a veteran player, he can also provide leadership to his younger teammates. Odom can provide great minutes off the Clippers’ bench. It wasn't too long ago that he won the Sixth Man of the Year award. Despite coming off a troubling season, Odom is determined to start fresh and fill any role.

It's the addition of Barnes where the cons start to pick up. Barnes is a good defensive player and is sure to still have good chemistry with his former teammates. But he will have to gut out a stronger effort offensively and try to get more open shots. Last year, he averaged seven points and five rebounds a game. It may have been enough at the time, but he will need to do more to show the Clippers why he is an asset to the team. His run-ins with the law might become a distraction if they continue into the season.

The Clippers also acquired Crawford from the Atlanta Hawks. Although he averaged 14 points a game, he only averaged two rebounds a game. He will need better shot selection, compared to last season where he barely made more than 40 percent of his shots.

The Clippers have what it takes to have another good season, and attempt to take the number one spot from the Lakers. As for battling the rest of the West, they have their work cut out for. It won’t be easy to surpass the Oklahoma City Thunder, Denver Nuggets and San Antonio Spurs, but it is doable.

One thing is true, their season lives and dies with the healthiness of Paul and Griffin. Both players dealt with injuries this off-season, but they are reportedly ready to take the court in October. We know Griffin is signed to stay in L.A. for the upcoming years, but with these new acquisitions, Paul might too.

That will give the Clippers the opportunity to be a Western Conference contender.

For more information on the Los Angeles Clippers and their upcoming 2012-13 season schedule, click here.