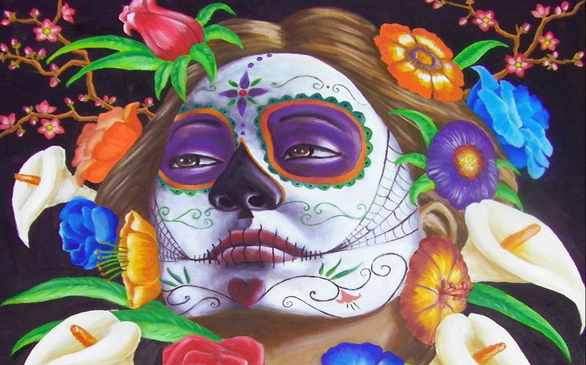 Art work, such as that above, will be on display.
(Credit: Carlos Nieto III)

Located near the University of Southern California, Mercado La Paloma is inviting the greater Los Angeles area population to join them in celebrating Día de los Muertos with the Cultural Continuum series.

Filled with art, food and several cultural events that begin today and end Oct. 28, the Cultural Continuum series features fixed media exhibits, live music performances, dance, lectures, workshops, along with cooking classes and tastings. The activities are being utilized so that community members of diverse cultures enjoy and teach others about their respective heritage, according to a prepared statement.

Mercado La Paloma, which is a non-profit community marketplace in South Los Angeles that provides space for emerging entrepreneurs specializing in culinary, homemade, handmade and cultural items, is scheduled to include six unique events, beginning with tonight’s art exhibit “Renaissance 2012” from 7-9 p.m.

Curated by Xamanism’s Art Chabolla, this free exhibit opening carries inspiration from the Mayan Calendar’s Baktun cycle, a 144,000-day cycle that ends December 2012. The art pieces will explore the themes of time, death and rebirth and will include the works of Mario Sibaja and Elizabeth Retolaza.

"It's an art show curated to the Mayan calendar and Día de los Muertos," said Chabolla, who worked as a designer for multiple corporations such as Intel and Disney. "In putting these two subjects together, we get Día de los Muertos, but we see the end of a cycle and the birth of another."

According to Chabolla, the purpose of the exhibit serves as a function to change the way people think and live while providing a positive and energetic thought.

"We are really pushing towards that vibration," he said.

Two different workshops are schedule to take place as well, starting with Sunday’s session of an introduction to altar making. It allows people to understand the history of altars and their significance to Día de los Muertos. That will continue, however, as the Oct. 27 slot has its participants making actual altars. Also, papier mache mask-making, sugar skull decorating and papel picado/Mexican paper cuts are part of that day’s meeting. Both workshops are free.

One of the highlights of Cultural Continuum is the two cooking classes. On Oct. 19 from 6-9 p.m., individuals can join Chef Gilberto Cetina of Chichen Itzá in an effort to learn cooking motions of traditional Mayan food. A week later on Oct. 26 (6-9 p.m.), Chef Raul Morales of Taqueria Vista Hermosa will teach the participating people how to cook traditional dishes from the Mexican state of Michoacán. Both classes cost $60 each.

Cultural Continuum, which is underwritten by a major grant from ArtPlace, finalizes with an 11-hour-long festival (11 a.m. – 10 p.m.) on Oct. 28. Both Esperanza Community Housing Corporation and Chabolla have joined forces to present this annual event, offering food and music, theater and dance pieces on six separate stages. Entry to the festival is free.

"We are going to have close to 32 performances. Everything will be very traditional, indigenous, multicultural and down-to-earth," Chabolla said.